Best games that are completely free and 100% free, free, free, without the words “Offers in-app purchases”, without limitations 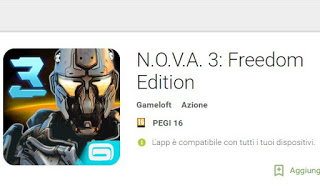 Most of the free Android games that can be downloaded on the Google Play store have one flaw: they have the inscription: “Offers in-app purchases“, which means that inside you can get upgrades, items, progress only by paying with real money.
This defect can be negligible for some games, where however you can go on without problems, or it can be very limiting and discouraging, with only a few free levels or that even forces us to be careful with every touch you make because it can be paid.
In this article, we try to find the 10 best games completely free for Android, without, at least for now, the writing “Offers in-app purchases” and are therefore 100% free, without tricks and without deception.READ ALSO: Best Android Games to Download for Free from Google Play

1) Chess, dice and card games of AI Factory Limited, a developer that makes games or 100% free or that cost a few Euros but then have no in-app purchases.

2) Bombing Bastards touch is a free puzzle adventure game (with advertising) similar to the old Bomberman games, where the main character uses bombs to kill the bad guys so you can move on to the next level.
It’s not a big game, there are 30 mazes in total with lots of items and power-ups to collect and five boss fights.

3) Fighting Tiger – Liberal is a game of fighting and action where you have to save the girl by beating the enemies with all the moves you can learn and also with the weapons you collect.
This is an old game, completely free today.

4) Gamestart 2015 was launched as a promotional game for the festival from which it takes its name and is not bad at all.
The game is a side-scrolling platformer shooter with various levels, different characters, and weapons, with retro graphics, very fun and fast.

5) It’s a Space Thing is a shooter released in 2016 in arcade-style where you play shooting from the bottom of the screen upwards.
The controls are simple, but the game is quite intense, the graphics are very retro, and with five Bosses to deal with.
What’s more, you can also play against another person in multiplayer.

6) The Lego games, for the most part, they are completely free to play and with no in-app purchases.
Some of the best are those from the LEGO Nexo Knights series, LEGO Ninjago and many from the LEGO Star Wars series.
Each game has its own mechanic, with most of them being active and adventure games, fighting or shooting games.
This Lego is really a great surprise to discover, especially since all these are games suitable even for younger children.

7) Mekorama is a 100% free game, where the writing appears in the card on the store Offers in-app purchases, but only because inside the game it is possible to make donations to its author completely optional.
Mekorama is a minimal game, puzzle game, where you have to solve 50 levels where you have to find the way out.
The game, with 3D graphics, allows you to rotate the scenario to find the best solution.
It is very relaxing and with just a few Mega downloads it is also great for low-end or older smartphones.

8) NOVA Legacy is the non plus ultra of free games without in-app purchases, the most popular, the most appreciated and the most downloaded.
It is a high-level 3D shooter, with a story of missions where you have to save the Earth from a host of hostile aliens.
There is also a multiplayer mode where you can play with up to 12 players in total in various crash modes.
NOVA 3 is still one of the best FPS shooter games for Android and iPhone ever.

9) Remixed Pixel Dungeon is based on the open-source RPG game Pixel Dungeon with lots to do and lots to explore.
The game is free without purchases in the app, the writing on the card only indicates that it is possible to make voluntary donations to the developer.

10) Cube Escape is a series of Rusty Lago puzzle games that are all completely free and 100% free where you have to find clues, Put the puzzles together and understand exactly what is happening and how to escape.
There are currently eight games in the series all free, and although the graphics are rather poor, the puzzles are certainly compelling.

11) Stickman Dismounting is a small simulation game in which the objective is to completely destroy a stickman (a little man drawn in slats).
In each level, try to creatively destroy the stickman to earn more points.
Its peculiarity is in its physics and in the way in which one can see and appreciate how much damage is being done to the poor little man.
The game is simple and not raw but in a certain way even a little violent.

12) Ingress, the game of augmented reality which can be considered the predecessor of Pokemon GO, is completely free to play.

13) Bunny The Moon is a simple and free game where you can fly a rabbit in the clouds and avoid obstacles.

14) Merchant is a medieval RPG for fans, free and free of any in-app payments.

15) Circle Rush, a simple game that can take well, minimalist and that you can also play in two on the same Android smartphone.

16) Shapik The Quest, an exploration game with a nice story, puzzles and all for free.

18) Battle Slimes is a nice multiplayer game in local where you play with blobs that have to fight against each other.

19) Neon Shadow is a pretty decent shooter game and completely free with no app purchases.

20) Electro Rush, it’s a really amazing game, which would be fundamental in 3D Pong, with a really original minimal graphic.

How to improve the phone’s camera