Home iPhone 30 App for playing and making music on Android, iPhone and iPad 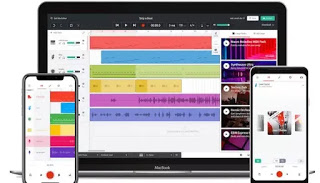 Playing with a smartphone or tablet may seem impossible, except that some applications have come out, for iPhone and iPad and for Android, really powerful that allows anyone to make and create music in a simple way and to those more experienced to have available professional quality mixers and instruments. In this article we see the best apps for Android, iPhone and iPad to play with your fingers on the touchscreen, trying to privilege the free ones, without renouncing to mention, however, even the best-paid ones. Such as app for making music there are music generators, mixers, and sampling apps and synthesizers while to play there are the apps that work like virtual musical instruments.
As you will notice, for the iPhone and iPad there are certainly more musical instruments, although many of them are also available on Android.

The best apps to generate or manipulate and mix music on iPhone and Android I’m:

1) GarageBand for iPhone and iPad is free, very powerful as a mixer and synthesizer, by Apple. It is a recording studio with piano, organ, guitar, and drums to play by touching the screen. You can even connect the iPhone to a real guitar to record chords. The app is full of almost professional effects and tools.

2) Auxy is the best music production app on the iOS platform for iPhone and iPad.
Auxy tries to simplify the process of musical composition with a keyboard to write looped melodies, bass lines and complex drum patterns that can be set using automatic instruments.
Auxy can be downloaded for free, with a monthly subscription of $ 5 to unlock additional tools, thousands of samples and the ability to import your own sounds.

3) Bandlab for Android and for iPhone is among the best applications for recording music. BandLab is a digital audio workstation that offers the possibility of recording up to twelve different tracks, with a hundred virtual instruments and a huge library of rhythms and loops for composing songs. Also, you can record instruments and your own voice using the phone’s microphone. The app is similar to Garageband, simple and easy to use.

4) HumOn, free for Android and for iPhone is an app for people with zero musical knowledge who can use it to compose songs. The app transforms any song sung to voice into music and is capable of analyzing melodies and providing musical notation and chords based solely on vocal intonation.

5) Remixlive (Android and iPhone) is a very innovative sampling tool for playing loops and tracks to mix even with recordings. RemixLive is an extraordinarily capable app for mixing loops and effects in original compositions. The user interface is intelligently structured, giving users access to a variety of tools without confusion. The free version of the app gives you access to fifty free sample packages, while additional companion packages can be purchased.

6) As a free DJ Mixer, which shows the two turntables on the screen and allows you to mix music from one song to another using a mixer you can install Edjing console on Android and on iPhone and iPad.
The application is simple to use and allows you to mix thousands of songs thanks to the integration of Deezer and Soundcloud online services.

7) The app for Android DJ Studio 5 is another mixer with turntables, very similar to Edjing, which lets you make DJs using your smartphone or tablet.
Its ease of use makes it a good choice for beginners but can also be appreciated by more experienced DJs.

8) Figures for iPhone and iPad creates music automatically and lets you create basslines playing with time and sounds. There are predefined sounds and paid expansions to expand the samples to be used to create the melody.

9) Music Maker Jam of Magix for Android and iPhone / iPad is a free app for creating music from scratch by combining various musical instrument sounds and mixing them together.
With a multitrack interface, you can overlap and combine different loops and chords so you can create wholly new and original music, to record or share.

10) Drummer for iPhone is DrumPads 24 for Android they are two similar applications to create bass turns and rhythms using a grid of buttons to touch and play. In a very simple way, you can create a base to play on or a rhythm to dance to.

11) Caustic 3 for Android is a free app that works like a real professional synthesizer, full of knobs to play with sounds and music.
It is a very complete and powerful program on which it is also possible to load own Wav files.
Caustic is also available for iPhone and iPad but costs as much as 11 euros.
Caustic 3, on the other hand, is a true digital audio workstation oriented for musicians trying to compose synth-based tracks. Caustic 3 features fourteen different machines, including multiple synthesizers, drum machines and vocoders, multiple effects and samplers, parametric equalizer and a sequencer. Caustic 3 is definitely not a program for beginners.

12) SoundPrism, just for iPhone, is an app to create music through a filling control interface, perfect for creating melodies and ringtones.

13) Songify and AutoRap are applications already described in the past, for Android and iPhone / iPad, for transform words into music or a Rap

14) FL Studio Mobile, for Android and iOS, is a relatively expensive application, 15 Euro, which functions as a quasi-professional recording studio to create music with multi-track.
Ideally, it would be integrated with the FL Studio for Windows PC program, the most popular commercial music production software, also used by famous artists.

15) Keezy app for iPhone to play music easily, generating drums, bass and melodies, each of which can be optimized, erased and reconstructed effortlessly and without the need to have studied music.

16) Ninja Jam, for Android and iPhone, is an app a little more complex to learn, but still, that turns anyone into a musician.
The application is based on pre-registered samples (many of which must be paid) and once loaded can be manipulated.

17) SunVox, for Android and iPhone, is a professional app, a sequencer completely based on patterns not suitable for beginners.
The app includes several modular synthesizers and effects processors, including an analog generator, a drum synthesizer with 120 built-in sounds, echo, distortion, reverb, voice filter and a module to create synths and effects.

18) KORG Kaossilator is an app that costs 20 euros for iPhone and Android.
This is a real musical instrument, which uses a touchpad to manipulate the built-in sounds and create strange and wonderful musical pieces. It provides five audio channels to be activated at will, to create remixes and control loops in real-time.

19) Loopy only for iPhone and iPad is a brilliant and simple app for making music and recording audio.
Loopy offers six, nine or twelve empty loops on which it is possible to record and superimpose sounds that can come from the microphone of the iPhone or from other apps that use AudioCopy and AudioBus or even from the recording of instruments. You can then manipulate and modify the sounds, change the tempo, join the tracks together and overdub the recordings onto others. There is MIDI control for using Loopy with a pedal, making it an ideal instrument for live musicians and street performers.

READ ALSO: Mix and create music from professional DJs on the PC with the best free programs

The best apps to play musical instruments virtually on Android and iPhone instead they are:

1) Touch Xylophone for iPhone and iPad e Xylophone for Android they play the xylophone which is fun too and especially for children.

4) Guitar FREE Steel Guitar is Instant Guitar for iPhone and iPad, Real Guitar, Guitar the only lite is Virtual guitar for Android they are apps for playing the guitar virtually, touching the strings and creating chords.

5) Walk Band just for Android is an app for playing piano, drums, drums, and guitar, to compose one’s own music even if nothing is known about notes and pentagram.
The application also supports Midi keyboards connected via USB.

6) Guitar Player is an innovative and beautiful app that allows you to virtually play the guitar as if it were real, holding the phone with two hands and pinching the virtual strings. However, this is not an application, but a website that is optimized for Android, iPhone or Windows smartphones.

7) Arpio, describes itself as a new musical instrument to be played only on Android even if no instrument has ever been played before, and is basically a sequencer.

8) Guitar Tuna Tuner Tuner, for Android and for iPhone it is an effective graphic guitar tuner that you just have to look at and imitate to tune any stringed musical instrument.

9) Metronome for Android it is a metronome app for synchronizing the rhythm.

10) Yousician Guitar, Piano & Bass (Android – iPhone), the best application to learn to play the piano and the guitar, really effective and simple, with lessons for beginners and those who are learning.

How to exchange music, videos and pictures between iPhones