Continuing the hunt for free games to play online via browser or to download, as we see in this article every week 5 very nice and fun games that can be played online in multiplayer.

The genre of games is that of Massive Multiplayer Online (MMO) which I am often a mix of role-playing to the Dungeons and Dragons, where you play a warrior or a medicine man, and the action game where you have to shoot enemies and be careful not to get killed.
The web is full of MMO games, with free video games full of real players who can compete against each other or team up against a common enemy. Generally, they are challenging games, in the sense that after having chosen one then, to become competitive you have to connect often and play even just 10 minutes to score points and experience. The difficulty is to find beautiful games that can be played freely and for free, with no level limitations and with equal opportunities compared to those who buy credits or expansions.In this list we see the link to play at 5 new free games and then a summary of similar games, always MMO, presented in previous articles. 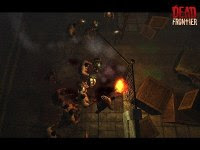 1) Dead Frontier It’s a completely free game and really fun even if it’s not suitable for everyone.
American series lovers The Walking Dead will immediately race to sign up for Dead Frontier, a horror game where you have to spare the Zombies.
This MMO of horror has a history similar to that of Resident Evil, where a virus has infected the population by making the infected zombies. The player takes on the role of a survivor who must fight for survival against the living dead. The thing that makes it different and so worth playing is its excellent graphics thanks to the Unity browser plugin that you need to download to play. There is no client to download and you can play directly from Internet Explorer, Firefox or Chrome.
The game is all about action, with a graphic from above in perspective, where you move with your mouse and darts, shooting all the zombies and wandering around the destroyed city. As you move, you meet other real players with whom you can work together to achieve the goals of the game that include finishing missions, research, and equipment purchases. The player must choose the character to impersonate between different types: engineer, doctor, soldier etc, each with different bonuses.
Dead Frontier is free, not limited and absolutely playable competitively even without spending money to buy the expansion.

If you like the Zombie theme, remember from other articles:
The best horror games with zombies;
The game made in the interactive film The Outbreak, like “The Dawn of the Living Dead”.
The first-person shooter game on Steam Zombie Panic reported in the article on Team Fortress and the free mods similar to Half-Life.

2) Dark Orbit is another game that does not require you to download any client and that you can play from the browser, in Italian. The game is completely free, without subscriptions, although it is often suggested to buy upgrades that should not be essential but which certainly help in the game. The dynamic of this space game is to tackle missions with your own fleet and explore the universe, face battles against enemies and defend yourself from attacks. There is absolute decision-making freedom on how to move and how to deal with missions, without ever having a precise path.
Dark Orbit is one of the best MMO space games even if there is no lack of other beautiful alternatives Star Wars games with travel and space battles in simulations, MMOs and browser games.

3) If you want more adrenaline, you can play immediately CrimeCraft: Bleedout, a hectic third-person shooter and also a Multiplayer RPG which can be downloaded for free from the Steam online store. CrimeCraft is set in the world of Alba City, a metropolis in economic and social decline. Players compete in intense fighting between team players, with over 20 battle maps, dozens of game modes, and hundreds of weapons and skills to master.
Crimecraft Bleedout is possible to download free from Steam, after downloading the platform.


Why should a fan of multiplayer games for PC install Steam?
To play for free to some of the best third-person shooters ever: Team Fortress is Alien Swarm.
Among the other multiplayer shooting games, I also point out the War games like battlefield Play4Free.

From the list of best shooter games online, Combat Arms and Fear and S $ League among the best.

4) League of Legends is a team battle game, 5 against 5. At the beginning of the game, each player chooses a sample (currently 76 in total), although the choice will be limited based on progress and experience. There are two game modes, normal and ranked (Ranked) which are accessed after accumulating some points and levels. To play, simply register a free account, download the client to play from the computer and then follow the tutorial to learn how to fight, control and how to use objects.

5) Changing genre instead, we see an MMO of the role-playing game like Maple Story 2, an MMORPG game that I had already reported in the past very nice with horizontal scrolling.
I refer to another article for the updated list of best multiplayer role-playing games online and free on PC.