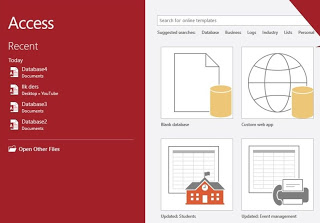 Microsoft Access is one of the oldest programs, a very particular product integrated in the Office suite that allows you to create relational databases. The peculiarity of Access is in its ease of use: while database software is rather complicated and requires a certain study, Access can be used by everyone even without having studied because it has an intuitive graphic interface, where you just need to know the basics fundamental to immediately understand what to do. This ease of use is one of the main reasons for the success of a program that has existed for almost 30 years.
The problem is that while Access, until a few years ago, was integrated in the standard Office suite together with Excel, Powerpoint and Word, today it is only available with a Microsoft 365 subscription and it is, therefore, more difficult to fix it (although it can still be found in Office versions 2016, 2010 and 2013).READ ALSO: Microsoft Access preliminary guide to understand how it works and what it is for

Microsoft Access (now officially called Microsoft Office Access) is a Microsoft relational database available only for Windows, consisting of several programs: the Microsoft Jet database engine, a graphical editor, Query by Example interface for querying databases and Visual Basic programming language. Microsoft Access allows you to graphically manage data collections in tables, establish relationships between these tables according to the usual rules of relational databases, create queries with QBE (Query for example or directly in SQL), create customized interfaces to extract data also with automatisms and buttons and print reports.
Unlike data management systems that operate according to the client-server principle, such as MySQL, Microsoft SQL Server, Oracle Database, Microsoft Access is an office data management system. The data created in MS Access is saved in a single file, in format .mdb or, more recently, in format .accdf. In addition, a typical database server usually does not create a single file for each database, but a complete folder, where the content and shape of a database are separated into several files.
Microsoft Access is particularly suitable for beginners in database management since no programming knowledge is required and because it makes it easy to create simple databases using the graphical interface of the tool. The task is made even easier by numerous models, for example, to manage contacts, resources, and projects. However, it is possible to freely define the fields and adapt the characteristics of the models to specific objectives. If you want to use the platform to create extended applications, you can use the use of VBA (Visual Basic, Applications Edition) programming.
Creating and managing a data suite, but also analyzing and extracting reports, is often easier than with other database management systems. Saving a Microsoft Access database to a single file simplifies sharing with other users or archiving to other media.
The simplicity of the software, however, comes at a price: a typical Microsoft Access database system is much less powerful than that of a server database. The tool is more suitable for implementing light databases, not those with hundreds of thousands of entries, for which it would be better to use a dedicated DMBS server. Performance is also not one of Access’s strengths because processing a large amount of data stored in a single file can take a long time to load. And the larger the file, the longer the wait time. The program is also severely limited in terms of database size because its single file cannot exceed 2 GB. Performance is also limited when there are multiple users connected to the database, reaching the limit with ten simultaneous users.

There are several free programs to perform Microsoft Access operations.

2) DB Browser for SQLite
DB Browser for SQLite is not a database engine, but rather a front end for SQLite that allows users to create and use SQLite database files without having to know complex SQL commands. In a nutshell, it adds functionality similar to Access to SQLite thanks to a spreadsheet-like interface and predefined wizards that allow even new database users to move around without much basic knowledge.
Through the wizard, you can easily create and modify database files, tables, indexes, records, etc. You can import and export data in common file formats, create queries and searches. The product is available for Windows, macOS, and Linux.

3) Kexi
Kexi is the database application included in Calligra Suite, which is part of the KDE project, but can also be used on Linux BSD and Unix machines running GNOME, on Windows and Mac. The product integrates perfectly with the other applications of the suite that includes programs similar to Word, Excel, Powerpoint, and Project. Kexi has all the standard features expected of an alternative for Access such as database design, data storage, query execution, data processing, and so on.

4) nuBuilder Forte
NuBuilder Forte is different from other tools on this list, it is a browser-based front end for developing web-based database applications and is designed to be as simple as possible. It has a clean interface that can be used even without writing programming code (including support for drag and drop), to quickly create and use a database. And as a completely web-based application, data is accessible anywhere from a browser. Everything is stored in a MySQL database and the database file can be backed up. NuBuilder Forte uses standard coding languages ​​such as HTML, PHP, JavaScript and SQL.

5) Axisbase
If the price is the main reason to look for an Access alternative, Axisbase could be the right choice: this program was created by a developer fed up with forcing his customers to pay for Microsoft Access. While product development seems to have stopped several years ago, it could still be a viable option, with an interface that looks similar to Microsoft Access or LibreOffice Base. On the whole, however, it is not a simple software to use like the others, because Axisbase databases are developed as blocks or subsets of data that can become excessively complex.

READ ALSO: Access or Excel? what differences and which is better?

How to connect the Smart TV to the Internet