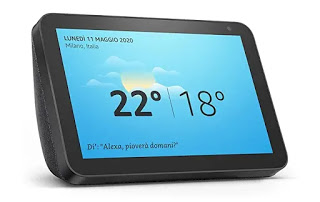 Amazon has now launched a wide range of Echo devices to meet any need, with many versions of "Smart" speakers ready to answer any question or voice command and perfect for listening to music. Echo have been successful in Italy, not only because it is an innovative technological device for listening to music, but also because it includes many useful functions, at a decidedly low price (at least in its basic version). In addition to the official Echo versions, there are also non-Amazon Alexa devices and versions that are not for sale in Italy, at least to date.
In this guide we review the best Amazon Echo models comparing them, referring to another article to find out which are the best smart speakers with Alexa that are not Amazon Echo.

1) Echo Dot (the basic model, 45 Euros)
Who wants to try Alexa at home, who wants to have multiple devices connected, who does not pretend to listen to loud music and who does not want to spend too much, can buy the third generation Echo Dot. With a price of less than 50 Euros, which drops to 30 Euros during frequent promotions, you get a small-sized device that is easy to put almost anywhere in the house. By buying two or more Echo Dot you can use them to create an entire home intercom system. The Echo Dot costs less than other models just because it is smaller and therefore has a less powerful sound, but has no limitation in its functions.

2) Echo (for those who love music, at 55 Euros)
The model called so lo Echo is the large version of the Echo Dot, with a quality speaker that allows you to listen to loud music with 360 degree sound that fills a room well, dynamic bass (thanks to the 3-sub-woofer inches) and integrated Dolby audio. The Echo model costs slightly more than the Echo Dot, so at the moment it is clearly the most convenient to buy (even if it is heavier).

3) Echo Show (ideal for making video calls)
If you want to use the Echo not only to make phone calls, but also video calls, you can buy an Echo Show with the screen. The Echo Show can video call other Echo Show devices for free, using the built-in camera. Obviously the presence of a screen makes this device more beautiful than the others, with the possibility of seeing personalized backgrounds and images as if it were a frame, to also see videos from the internet (for example recipes or fitness videos) and use it as a digital bedside clock .
The Echo Show 5, the one with the smaller screen, costs 100 Euros while TheEcho Show 8 it comes to 130 Euros while to buy the 10.1-inch Echo Show, which also has a better sound, you have to pay 220 euros for it.

4) Echo Studio (for superior audio quality, at 190 Euros)
The Echo Studio stands out for its superior sound quality, with Dolby Atmos technology and five speakers: 1-inch tweeter, three 2-inch mid-range speakers and a 5.25-inch subwoofer. The Smart Speaker automatically adjusts the sound to best fit your space. It is also the only Echo device to support HD, 3D and Ultra HD music.

5) Echo Plus (70 Euros)
The Echo Plus (second generation) is a device very similar to echo, with the small difference of having an integrated hub to manage other smart devices. Basically it is ready to use Alexa to control other Smart Zigbee objects in the house.

6) Echo Flex (access point to Alexa for 30 Euros)
The Echo Flex is not a real speaker, it has a very small audio speaker just to hear Alexa's answers, but it is almost useless if used alone. The Echo Flex is useful to add Alexa to a normal stereo to add voice commands to it or to connect an appliance to manage and automate it remotely making it Smart.
The Echo Flex is similar to another device, theEcho Input, which however has a very limited availability and is not for sale.

7) Echo Auto (to have Alexa in the car)
The Echo Auto is a rather particular device, designed to be able to have Alexa in the car in order to listen to music, hear news and manage the directions. The Echo Auto, technically, is only a Bluetooth receiver that can be connected to the smartphone (for internet connection) and to the car radio. I'm not sure I can recommend it to everyone, it costs 60 Euros and in the end it doesn't do much more than you can do by connecting your smartphone to the radio with the Alexa app.

8) Other devices not yet on sale in Italy that would be very interesting to try are definitely the Echo Budsi.e. wireless earphones with integrated Alexa. Through these earphones, associated with the smartphone, it is possible to interact with the voice assistant and listen to streaming music even while going around.

READ ALSO: Functions of the Amazon Echo, what it is used for and what it does

Best apps for traveling and going on vacation (Android and iPhone)