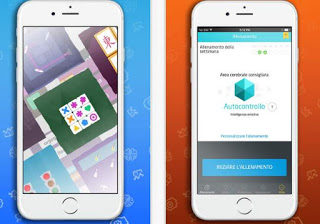 There are various reasons for wanting to increase one's brain capacity, to challenge oneself, for learn to concentrate, for train the memory or for improve calculation, intuition and concentration skills.
The best applications of Brain Training have been designed to increase cognitive functions, problem solving skills, processing speed and also to become more positive and optimistic.
There are also studies showing that people who engage in these games are less likely to develop brain plaques associated with Alzheimer's disease and to age more slowly, while remaining mentally fit.
Obviously you have to do a bit of sorting among the hundreds of apps and games that you describe as "brain training"to find out which ones really work, not just for fun and play, but also with some minimal scientific foundation.
In this article we therefore see the 10 best apps (Android and iPhone / iPad) to exercise the brain, with mind games and intelligence tests.

1) Lumosity (free – Web, Android and iPhone) is perhaps the best of these applications, a continuous test for a scientifically proven path of brain training. Games are designed to develop the five areas of the brain: speed, memory, attention, flexibility and problem solving. The scores of the various intelligence tests are recorded with an index called the Lumosity Performance Index (LPI), which allows you to compare the strengths and weaknesses of the various brain areas, plus a global LPI which is the average index. Lumosity is free, but limited to three games a day. Some advanced features like performance monitoring to compare with others, personalized training and full access to all games require a paid subscription.

2) Memorado, for Android and iPhone, offers different mental games, all of a graphic nature, with challenges designed to develop particular areas of the brain.

3) NeuroNation (for Android and for iPhone) is one of the best apps to improve the mind's abilities, to train the brain in a fun way, to strengthen memory and reasoning skills.

4) Peak Brain Training for iPhone and iPad and for Android it is considered among the best applications to train the mind every day with different tests of mental ability, fun and very stimulating.

5) Elevate for Android and iPhone is another very popular app with tests and games to train the mind, which offers a series of three games in rotation every day, each aimed at specific functions of the brain such as memory or math, keeping track of progress in a way to see how the scores vary.

6) mindgames, for Android and for iPhone is a collection of simple mind games, mostly visual, unfortunately not in Italian.

7) Personal Zen (iPhone and iPad only, free) is a game with two animated characters, one calm and kind and the other angry. This game, developed by researchers at Hunter College and the City University of New York, is an emotional test that helps reduce anxiety and be optimistic. The application is recommended for those who must prepare for a stressful event and it is recommended to play 10 minutes a day to have positive and lasting effects

8) Brain Games (free, only Android) is similar to Lumosity, with game tests and sequences to guess.

9) Happify (web and iPhone / iPad, free) is an emotional intelligence test to train the brain to be happier. Using the fundamentals of positive psychology, it contains quizzes, surveys and tests to focus the mind on people's strengths, with the ultimate goal of teaching positive life-changing habits. Unfortunately it is only in English.

10) eidetic (iPhone and iPad only, free) uses a technique called spaced repetition to help people memorize anything from important phone numbers to interesting words or facts. It works differently from other brain training applications and uses objects that have real meaning for people.

11) Intelligence puzzle games
There are many puzzle games on the stores of the various platforms, but two are those that have had more success in the last year, number games that require problem solving skills, memory, strategy planning and the brain in general.
Make7 (Android and Threes are also very fun and engaging games, already reported among the best numbers and math games for Android and iPhone.

The Crosswords, crosswords and Sudoku for iPhone and Android they are always great games to stay focused, strain your mind and keep it active.

Finally, Quiz games with questions for Android and iPhone, which are more like multiplayer challenges and tele-quiz games or Trivial Pursuit, always good for improving the general culture.

Play Android games on PC with or without emulator

How to restore removed applications