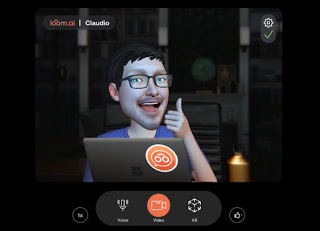 Programs like Zoom, like Google Meet or Microsoft Teams have entered the work routines for many people in smart working from home. With the massive use of apps to make video conferences, video lessons or group or even private video calls, there has been a major evolution of the various tools, with updates and the addition of features that would never have been thought of until last year or that might seem superfluous.

Among the various tricks to appear differently from reality in video chats with Zoom or Meet, we have seen how it is possible to cover or change the background behind it, perhaps to hide the clutter or for privacy reasons. Recently, a new application has come out that allows not only to change the background, but also to change appear as if you were an avatar, thus covering the face or the whole scene and background and showing itself as an avatar, which moves exactly like us.

The avatar can be very similar to our real appearance, or be a funny funny character. In addition to having fun, this type of application allows you to participate in video meetings without being seen in the face, but without turning off the webcam and the image of ourselves. However, it is not a question of putting a photo or a static drawing, but of appear with a moving 3D avatar, who moves and makes expressions following those of the framed person.

READ ALSO: Hide or change the wallpaper on Zoom and video calling app

There are various programs to create an avatar for use in video chat. The best is currently LoomieLive, free, which allows you to create a 3D avatar, animated, really cute and realistic, customized on your appearance. Loomie is a program to install on your PC that adds a virtual video device to your computer, so you can select it in any video conferencing application like Zoom or even like Google Meet, Jitsi, Microsoft Teams etc. Operation is completely automatic, without any particular technical difficulties.

To create the avatar with LoomieLive, it is only necessary install the application for Android or iPhone. In fact, from the program for Windows PC and Mac, it is not possible to create and customize the avatar that requires the app on the smartphone and the creation of an account. From the phone, then, once you have created the account to log in, you can take a picture through Loomie (or choose a ready-made photo) and then wait for our avatar to appear that reflects our physical characteristics. You can then further customize or completely change the appearance of the figure, using the various buttons to choose the type of skin, face, hair, nose, eyes, clothes, various accessories and much more.

When the avatar on the phone has been created, download, install and open the program for Windows or Mac and log in with the same account. You can then select the virtual avatar and choose, through the settings, how to make it appear. you can choose a different background, you can activate augmented reality to show the avatar's face above ours, thus leaving the webcam shot intact, you can make the real shot appear small at the top and much more. Using the controls on the image it is possible to enlarge the avatar's head, move it up or down, deactivate the microphone, deactivate the avatar, activate an "Away" sign etc. The button at the bottom also allows you to make the avatar raise his hand, say hello or make him move with other gestures.

To use the avatar in Zoom or Meet or other video calling apps on your computer, you have to keep the LoomieLive program open leaving it in the background and then, in the Video settings of the program to join a video meeting, change the video output by selecting LoomieLive Cam instead of the default webcam.

Note, that even without using the avatar, Loomie offers a very convenient way to change the background of the webcam frame in video chats, which works with everything.

In addition to LoomieLive, there is also another program that works in a similar way and is free, HyperMeet, for Windows and Mac. While the avatars have a different design which may be preferable according to your tastes, the program did not work correctly on my PC and therefore prevented me from being able to use it.

Finally, remember that there is yet another program, Snapcam, which allows you to use augmented reality effects and webcam transformations, very funny and one of a kind.

How to apply filters to photos

Instagram: A feature loved by stalkers may return soon

How to create shared folders without providing passwords

How to identify security problems in Wi-Fi

Zoom in on web pages and zoom in on Chrome, Edge and Firefox