Home iPhone Because those who use Android think that the iPhone is inferior and... 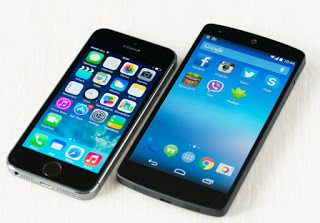 A bit for passion and also for the blog I had several smartphones in the past, an iPhone and several Android, Samsung, Nexus, Motorola, LG models.
Difficult for me to think of using a smartphone that is not Android, not so much because I think Google is cheaper than Apple and even better at providing a certain type of services like Google Maps and Gmail, but above all for the usability of Android phones, that if they are not cheap ones for cheap, they work better and are to be preferred.
In support of this thesis, we see here 10 annoying defects of an iPhone or, in other words, 10 reasons why users who have an Android smartphone prefer it and believe it is better than an iPhone.
The article focuses on minor annoyances that come out only after a certain period of use and not on those differences between Android and more obvious iPhones, like the fact that iOS has a blocked interface, like the lack of widgets on the screen and the fact that Android is a more open and more customizable system.

READ ALSO: What changes from iPhone to Android

The first annoyance with the iPhone is one of those little things that you don’t notice at first until they get boring.
With Android, when you want to adjust the brightness of the screen or the audio volume, simply touch the cursor in one place with your finger.
On iOS, however, you always have to drag it with your finger, making this change a little more laborious.

The back button of Android, so obvious and so natural, was missing on the iPhone until the update with iOS9, where it was placed in the upper left corner, in a very uncomfortable position, especially on a big screen.
It is also very limited and no longer goes back one level.

Since Android was created by Google, number one of the internet search, it is quite obvious that Android has a better data reload system than any other operating system.
For reasons of competition and competition, in iOS the search for the Spotlight instrument is powered by Bing and not by Google, making it really poor and at a bad level.
Furthermore, any research done on the iPhone contains irrelevant suggestions from Siri, the installed applications, the apps that you might want to install and then at the end there is a link to search on the internet via Safari.
READ: Search with Google from Spotlight, Safari, and Siri on Mac, iPhone and iPad

The control center on iOS is very similar to the menu of switches on Android, where you can activate and deactivate things like BlueTooth, wifi and adjust brightness.
But while, on Android, you can open the general settings of the operating system from here and go directly to the settings of wifi or BlueTooth, in iOS it is always necessary instead to return to the home screen, find the app settings and then search for the various Wifi, Bluetooth or other settings.
on Android, in addition, quick settings can also be changed by choosing which buttons to display.

5) What kind of iPhone am I using?

It is curious how, nowhere, is it written on an iPhone if it is an iPhone SE, iPhone 5, 6 or 6S, not even in the menu Information on.
Those who buy a used iPhone might appreciate having confirmation on the phone about the model that is on sale rather than reading a label on the back of the phone that can be easily modified.

6) It is not possible to delete an app’s data and reset it without having to uninstall it.

If an app shows an error or crashes often, it can be reset on Android by deleting the data it has stored up to now.
On the iPhone there is nothing like this and you have to uninstall the app and reinstall it.
This too, however, may not be sufficient because uninstalling on the iPhone only deletes the app, but not its data.
In many cases, the app data will remain in the iPhone’s memory so even if you reinstall the app, the same problems will recur.
The only way to completely remove all application data on iOS is to delete all iCloud backups and do an iPhone factory reset.
Fortunately, it does not often happen that an important app has such serious errors as to force the user to a factory reset.

7) Repaying difficult apps.
Getting refunds for a purchase made on Google Play for the Android smartphone is really simple and automatic, while on the App Store it’s daunting and not at all immediate.
We have seen this difference in the guide to request refunds for apps purchased.

8) Applications cannot be hidden from the home screen.

The home screen of an Android smartphone, if you want, can also be clean and without any apps on it, while instead that of the iPhone is all a list of icons and this cannot be changed.
Moreover, with any Android launcher, it is possible to hide some less used apps to prevent them from clogging up the list or for privacy reasons.
On iOS, this cannot be done.
In another article, the trick to hide apps on iPhone and iPad by creating sub-folders.

9) With just one button, nothing is easy

Why doesn’t Apple want to put fixed buttons on its devices?
The Home button on the iPhone does too many things: A short press leads to the home screen, a long press opens Siri, a double push leads to the recent apps, a triple leads to accessibility shortcuts (if enabled) and a double-tap without pressing it leads to one-hand mode.
5 things for a single button are, objectively, too many and those who say that the iPhone is easier to use than an Android smartphone, perhaps it should think again.

Apple imposes on the iPhone the use of the Safari rendering engine to open web pages, so every other browser including Chrome is obliged to use this one called UIWebView.
In essence, the browser change is discouraged because any other browser for iPhone other than Safari can never be faster, however, having to use its internal engine.

READ ALSO: What works best on iPhone than on Android

Messenger: in the roll-out the tab for the calls in the opening of the app

How to create a free FTP server