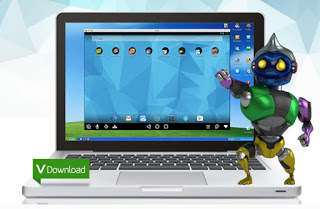 Thanks to an Android emulator it is possible, in fact, to use the same Android system found on all smartphones and tablets (not Apple) on your computer.
In this way it is possible, in a very simple way and without making particular configurations, to enjoy the applications and games developed for Android also on PC.
Of Android emulators for Windows have come out several over the years, increasingly optimized to run on computers, some better to play, others more generic for all applications like Whatsapp, Instagram, and Tinder.
Below, we discover the 10 best Android emulators for Windows who are all free to download and easy to install on each computer, which allows us to install and use smartphone apps together with regular PC programs.1) BlueStacks

BlueStacks is the most popular Android emulation program that has been more successful due to its simplicity.
In fact, this type of emulator makes it possible to install Android applications on Windows and Mac PCs using APK files that can be downloaded from the Internet.
Bluestacks works very well, it opens apps like computer programs.
In this program, we have written a dedicated article in the guide to install Android applications on Windows PCs with Bluestacks.

Andyroid is an emulation environment that opens on a PC in a window and allows you to use a system (Android) in the system (Windows).
With Andyroid you can install applications (all those available even those that require root access) and use them as you would on a tablet or smartphone, receiving notifications and updates in real-time.
In particular, it is possible to play the PC by controlling the game from the phone, which becomes like a wireless joypad.

Nox is another emulator of which I had already spoken in a special article, describing how to play Android games on PC with optimized controls.
Nox App Player is an Android emulation environment dedicated above all to games, making it possible to control them using mouse and keyboard.

Windroy is an emulator that is no longer developed and updated but works very well on older computers due to its speed of execution.

ARC stands for App Runtime for Chrome and is an environment that allows you to install and run Android applications in Chrome on a PC.
In fact, it is a very simple extension to use that allows you to load APK files to open it on a PC without any particular configuration, in an immediate and fast way.

This Android emulator for Windows allows you to use any application on your PC, even using Google Play Store or downloading APK files.
As a virtual desktop, Droid4X relies on VirtualBox to create an environment that emulates the ARM processor of tablets and smartphones.
Droid 4X works well to play and has the characteristic also to falsify the detection of the GPS position, deceiving the app regarding the country of origin.

KO Player is an independent project based on Android x86, the version for laptops.
This completely free emulator is very light and stable, especially good for playing and with different accesses like video recording.

This emulator allows you to virtualize Android on PC in a simple way and with a simple installation of the program.
This software is mainly geared towards application developers who can, therefore, have a test environment capable of emulating all the best-selling devices, including smartphones and tablets.

Memu is an optimized program for playing Android games on PC, so you can easily control them even without a touchscreen.
Games and applications can be downloaded and installed directly from the program’s website and you can play with the mouse or the joypad to games like PUBG free even on PC.

WhatsApp: news on Companion Mode, the footer for encryption is released