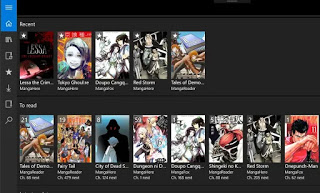 We are many fans of Manga (also me) and on the internet there are in large quantities, both to read for free online, both with subscriptions (if you want regular sites with high quality and newly published volumes), and also to download. Japanese comics are now a great classic, with adventures of all kinds and the most diverse genres ranging from romantic stories to the most violent manga and horror. Like ebooks, manga can also be read through a computer screen or, even better, via a smartphone or tablet.
The manga, however, are not normal books, but comics that have a specific reading order, often with the tables inverted compared to the Italian comics (in Japanese it reads from right to left). Manga files can be readable PDFs with Adobe Reader or any PDF reader both on PC and on smartphones and tablets, but more often they are found in formats that are not supported by Adobe Reader such as CBR, CBZ, CBT, CB7 or CBA.
Using a specific application for manga you get not only a better reading, but also aorganization of files tidier and the possibility of being able to choose which one to read in a much simpler way than you would with PDFs. In addition, most applications are not only basic readers, they also have a manga catalog to download and read offline, for free.
Below, let’s see the best apps to read Manga on PC (Windows 10), tablet and smartphone (Android and iPhone / iPad).

1) Adobe Reader for Windows 10 is the most used program to open PDFs on the PC, which also works very well with Manga if they have been downloaded in PDF format. Adobe Reader, however, as mentioned above, is not convenient for organizing comic book episodes, for grouping them and organizing titles. It also cannot read comics formats downloaded as CBR or CBZ files

2) Manga Blaze is the most popular manga reading app for Windows 10 in the Store, free, reliable, fast and excellent for reading, organizing and keeping track of your favorite manga titles. You can keep your mark on pages still to be read, quickly resume reading from where you left off and receive notifications when new chapters are available. Manga can be downloaded in Italian or other languages ​​to read them even without an internet connection. Manga Blaze relies on multiple manga sources in six languages: English, Italian, German, Spanish, Russian and Portuguese. This application has some limitations in the free version, but the Manga Blaze Plus version costs just 1.50 Euros.

3) Manga Z is one of the best manga reader apps for Windows 10, made to look like a real manga magazine. Manga Z allows you to read manga and download them for reading oggline, put titles as favorites to find them easily and get notifications when new chapters of a comic are available. There is no advertising while reading and you can pick up where you left off.

4) Manga Reader supports all manga formats and allows you to read the last chapters of your favorite manga titles. It has the function of the bookmark, the favorites section and a catalog to browse through which to choose the comics to read. you can read both vertically and horizontally and customize the settings to receive notifications when new chapters are available. From the application you can download manga from the internet for free.

5) Manga Bird offers many manga titles that can be read and downloaded for free. The app has an interface designed specifically for reading Japanese comics and has the function to organize your favorites. You can customize the reading orientation and the background colors, even if there is a somewhat cumbersome advertising banner.

If you prefer traditional programs (other than applications from the Microsoft store), we have seen in another article how to open CBZ and CBR files on PC

App to Read Manga on Android and iPhone

1) Amazon Kindle and Google Play Books: these being the most popular platforms for reading eBooks, applications Kindle (Android and iPhone) e Google Play Books (Android and iPhone) also support manga reading. The catalog is however very limited (often for a fee), so they can be good only for first readings. The convenience of these applications is that they allow download for offline reading and collection synchronization between devices.

2) Anime Amino (Android and iPhone) is a kind of social network for fans of manga and anime. The general idea is to explore the net, find advice and discover new readings. The service boasts as a place for anime, manga, cosplay and the like fans. The app is free with no in-app purchases or ads.

3) Comic Trim (Android) is an application capable of reading and correctly opening CBZ, CBR, ZIP, RAR files, image and PDF folders, most of the formats used by the manga. This application is great for those who already have a collection of downloaded manga and just want an application to read them. The free version includes night reading mode, magnifying glass, gesture controls and other functions. The premium version removes advertisements, supports higher resolution images and has a completely dark theme.

3) Comixology (Android and iPhone) is an app for reading comics of all kinds, both Japanese and normal ones such as Marvel or DC. There is a collection of manga to read inside and a good interface for reading from smartphone or tablet. The comics can be purchased individually or even with a subscription.

4) webcomics (Android and iPhone) is a huge app with lots of comics to read, even if they are not really Japanese manga. The app uses in-app purchases or single comic book purchases or a subscription service, but you can also download each comic for free by earning credits by watching advertisements.

5) MangaToon (Android and iPhone) is one of the most popular Manga applications on both application stores, with lots of content written and designed also by independent designers (anyone can publish on this app). On the reading side it works well, with a system of categories, favorites and the possibility to download entire chapters and read them offline. The download of manga is not free, however, there are virtual coins to spend, with fairly low prices.

6) Manga Geek (Android) is a free app for reading free manga taken from the internet. There are not all manga for copyright reasons, but the collection is really large and through the search you can find the most beautiful ones according to the genre, with the possibility of being warned when new chapters come out.

7) My Manga (Android) is a simple but functional manga app, with a library of free manga to read. You can browse manga by categories to find the ones you like best, you can add them to your favorites and it doesn’t have annoying advertisements.

8) Manga Reader – Manga Viewer (iPhone) is one of the best applications to read manga on iPhone and iPad that allows you to download and read thousands of manga for free, using the link to sites like mangafox, mangareader and others. You can search for manga by title, author name, genre and much more.

9) Manga Storm (iPhone) is another alternative for reading your favorite manga on the internet, with the integration of the best-stocked sites such as KissManga, MangaEden, MangaFox, MangaHere and many others. You can change the reading direction “From left to right”, “From right to left” or “From top to bottom”, you can read the chapters of a manga continuously, save the progress, download the CBZ files and sync manga to iCloud.

10) Manga.Lib (for iPhone) is one of the most popular apps for manga on iOS, easy to use and which allows you to download and read comics on iPhone or iPad for free (using the free resources of the web).

READ ALSO: Sites where to read Manga and Japanese comics on the internet also in Italian