Pacman, Space Invaders, Uno, Angry Birds, and many other free games now included in Facebook Messenger and as instant games on the web 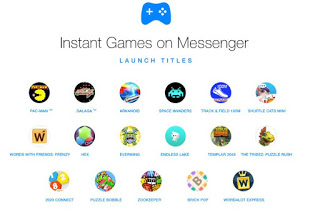 The app Facebook Messenger for Android and iPhone it is one of the most downloaded in the stores because it is necessary for Facebook’s chat from a mobile, but it is also one of the most hated because it is heavy and capable of slowing down the performance of the cheapest or oldest phones.
The fact remains, however, that Facebook is aiming to make its Messenger something that is not just a simple chat app, but a real platform in which to use other apps (in the form of Messenger bots) and also for playing.
In fact, in the last update a few weeks ago, Facebook Messenger has added games to the chat, complete and also elaborate, to challenge friends.
What is surprising is that among the various games available and all free, there are some complexes that have the advantage of do not require any installation, which loads from the internet quickly from the internet as if they were browser games.

To find the best Messenger games just start a chat with someone and press the button with 4 dots on the bottom left. A whole list of games that can be played in two or even alone will then appear.
The person chosen to play may not even be online, but when he finds out that he has been challenged he will see the score we have made to the chosen game and try to beat him.
For each game, then, you can touch the top button Challenges to see the scores of other friends.
In the list, there are some very welcome surprises including, above all, the great classics: PacMan, Space Invaders, Arkanoid and Track and fields 100 Meters. Pacman is the classic game of the 80s as well as Space Invaders, while Track and Fields is a historic athletics game that was called a joystick break because it required moving the knob to the right and left as quickly as possible.

Then there are puzzle games like Puzzle Bobble, Mahjong Trails, 2020, Jewel Academy, games where you guess words including Word with friends, the quiz game Trivia is Cooking Mama were to cook recipes.

The best thing is that all these games can be played not only from the Facebook Messenger app on Android and iPhone but also from PC, on the big screen, on the messenger.com site

I remember that in Facebook Messenger there are also three other hidden games not included in the collection and interactive on the chat: Scacchi, Palleggi with the ball and then the Basket. To open the Basket, for example, just send the emoji of the basketball in chat and then touch it to start a game with the other person.

If your PC is blocking downloads, how to unlock downloaded files in Windows 10