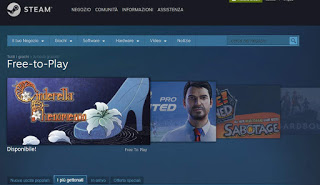 Steam is the most widely used video game distributor in the world, an online store with a catalog that far exceeds 10,000 titles, growing almost exponentially.
The problem, with so many games, is finding the most beautiful ones, those that are worth downloading, buying and installing.
Fortunately, the SteamPowered Store site offers all the tools to do targeted searches and discover the best titles, including free ones who have a separate list.First of all, the section to click on the left side of the main page of Steam is that of the special offers.
Once you have opened the Offers page, where you find the games with discounted prices, click on the right side on the word games to exclude expansions, software, demos, and extra content, so as to display only complete games.
At this point, it is possible to order games for user reviews, so as to find those with extremely positive reviews from Steam users.
To narrow the list, even more, it is worth using the filter on the right to display only those of a certain category and to filter them based on the number of players, depending on whether you want a multiplayer or single game.

To find the best free games on Steam of the moment go to the “Free To Play” genre section by going to order the list based on the most popular.
Among these, we find, in particular, some very famous and popular game titles for several years now, as well as some news, including:

1) Dota 2, one of the most played multiplayer games in the world, a mix of very competitive strategy and action, with many heroes competing in battlefields, in teams of 5 against 5.

2) Team Fortress 2, since 2011 one of the most popular and most entertaining games you can play for free in a wild and adrenaline-packed multiplayer mode.

3) Warframe a fighting and action game also in Italian, based on miseries to play in the third person with other players.

4) Path of Exile, one of the most popular role-playing games for several years, with action, fights, missions and continuous growth of the driven character.

5) Last Man Standing, a rather violent game, in multiplayer and with beautiful 3D graphics, where you have to kill all the opponents in the open field, without stopping and without respite.

6) Smite, another title of the historical ones, of the genre MOBA, where an arena is fought against other players, impersonating gods and gods.

7) World Of Thanks, one of the most downloaded and played games in the world, where you play in a war between tanks against other players.

8) Heroes And Generals, a free shooter that mixes action and strategy, where the Second World War takes place by fighting the battleships and armies of Germany, the USA, and the USSR.

9) Alien Swarm, an extraordinary shooter with a diagonal view from above, with beautiful graphics and great gameplay, of which expansion has now been released that has renewed the interest.

10) Infestation: The New Z, a Zombie shooter game set in an open world.

To be precise and up to date we cannot fail to mention here the number one game of Steam, PLAYERUNKNOWN’S BATTLEGROUNDS, which is not free, but in 2017 has become the real passion for all multiplayer shooter players.

How to use airplane mode on PC and Mac

Best Facebook Messenger and instant games on the web and app