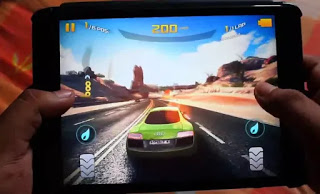 Smartphones today are even better than most portable consoles, in fact, in the stores, you can find some fantastic games with realistic HD graphics.
However, for the best gaming experience, it would be better to play on an Android tablet or on an iPad, because the big screen really makes the difference.
But which are the most suitable games for tablets?
In this list, we discover then free games for Android and iOS, with HD graphics, optimized for the big screen, which works well on smartphones, but even better on tablets like the iPad or any other with Android system.

1) Asphalt 9 is the best racing game currently available for Android and iPhone.
The Asphalt scenarios perform very well on the larger screens of tablets and iPads, as well as the sensation of speed in competitions and sports cars.

2) Hearthstone (Android and iPad / iPhone) is the best card game for tablets
Hearthstone: Heroes of Warcraft, it’s really nice, with a perfect balance of its cards, animations and excellent graphics.
I + n Hearthstone is played like a magician who must cast spells (which are derived from the cards you draw) to defeat your opponent.
These spells come from the cards you draw, and you play each round. It’s a tried and true formula that Blizzard has perfectly translated into a free-to-play mobile title. Best of all, it is constantly updated with more content. Not to be missed.

3) Deemo (Android and iPad / iPhone) is a great music game, relaxed genre, with a very high level of graphics and beautiful songs to listen to.
The aim of the game is to avoid obstacles and discover the passages during a fast race that never stops.

4) Modern Combat 5 (Android and iPad / iPhone) is one of the most beautiful shooters ever for smartphones, which on the iPad and Android tablet becomes even more playable and enjoyable.
A fast-paced adventure game in which to face hordes of enemies to move forward, with very accurate graphics.

5) Air Hockey (Android and iPad / iPhone) is one of the most fun and popular games of the iTunes Store ever and is also free.
The iPad screen turns into a game table in which to throw, with your hands, the disc to make goals in the opponent’s goal.
You can play in two on the same screen or even via Bluetooth, even if the friend had an iPhone.
If you play alone, there are 6 levels of play and you can even play with two disks.

6) SimCity Build It (Android and iPad / iPhone), where you can build your own city, build houses, run businesses like a mayor.
Sim City is certainly one of the best management games for iPad, iPhone, and Android devices.

7) Farming Simulator (Android and iPad / iPhone) is the farm simulator, where you can manage a farm in all aspects, with realism and 3D graphics that have nothing to do with Farmville or similar games.

8) Dream League Soccer (Android and iPad / iPhone) is perhaps the best football game for iPad, iPhone and Android tablet or smartphone, which is superior to me for gameplay and fun compared to more famous titles like FIFA and PES.

9) Simulador truck (Android and iPad / iPhone) is the truck and TIR driving simulator, really realistic and with great 3D graphics.

10) The Sims Mobile for Android and iPhone is the virtual multiplayer life game, which on a large screen has excellent performance and allows you to manage every aspect of the home and of things to do.

12) Sniper 3D Assassin (Android and iPad / iPhone) is one of the best sniper games, where you can shoot enemies from afar and become an infallible sniper.

13) PUBG MOBILE (Android and iPad / iPhone) is, together with Fortnite, the most played game in the world these days, of the Battle Royale genre.
You then play a subjective shooter challenging another 99 real players in a limited space, trying to be the only ones surviving.

14) Fortnite (free for iPhone and Android is the number one of the Battle Royale games, become an obsession for all players in the world, the most played game of the last year, with millions of players who challenge each other trying to stay alive in every game.

15) Pokemon Quest is the game of Pokemon, exploration, and collection, very different than Pokemon Go and more like Minecraft.

16) Alto’s Odyssey (Android and iPad / iPhone) is a descent along the mountains of beautiful scenery to look at, going on endlessly between jumps and pirouettes.

17) Walking Dead (Android and iPad / iPhone) is the most beautiful graphic adventure for mobile platforms, with a story worthy of the TV series, which changes according to the choices made.

18) Life is Strange (Android and iPad / iPhone) is another graphical adventure, released several years ago on PC and recently brought to smartphone and tablet.
In Life Is Strange, the moving and moving story changes according to the choices and takes the protagonist, with time travels and protagonists (especially women) who immediately become attached.

19) Draw Something (Android and iPad / iPhone) is made of fun daily challenges where you have to draw and guess the drawings of others as in Pictionary.

20) Clash of clans (Android and iPad / iPhone) is a game of strategy and game Tower defense.

You need to collect gold to fuel the city of builders and fighters, experiment with different types of troops, spells, and strategies to gain resources.

READ ALSO: 40 Offline games to play without internet on Android, iPhone, and iPad

Have we been hacked? All the methods to find out

How to verify activation of Fastweb