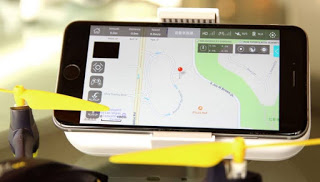 When we talk about such advanced toys it is difficult to think that they are only for children. In this list we will see some technological toys, which you can really buy on Amazon or other online stores, which have the particularity of being controlled by a smartphone. It is possible to buy, at a price from 30 to 100 Euros depending on the type of game, a radio-controlled robot from the phone, usually with an app for Android or iPhone smartphones. These toys are so special and crazy that in some cases they would leave not only our son, but also our friends and anyone who can really try them. There are unique planes, tanks, robots and gadgets, which they can move alone, fly, rotate, avoid obstacles, take photos or record videos.
As mentioned, the special toys described here are not prototypes or distant things (as often happens in newspapers that talk about technology always in the form of curiosity as an end in itself), but are really for sale on Amazon or other online stores e they can be bought or given by everyone, even today.

In the following chapters we will show you the best robots and the best drones that we can remote control via smartphone or tablet app, so that our children can play with a smartphone (even old and throw away).

The remote-controlled robots are wonderful to give to children and young people, as they also allow you to learn the basics of programming (via the dedicated app to be installed on a smartphone or tablet). 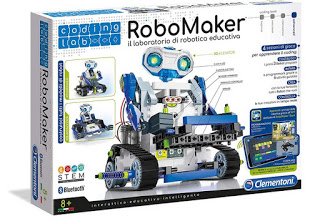 One of the cheapest robots we can give away is the Clementoni RoboMaker, a real laboratory to be used to create our robot from nothing with over 200 components, 2 motors, 1 speaker and an IR sensor. For programming we can use the app included with the robot, very complete to use (we can program every movement or action of the robot).
We can view this robot from here -> Clementoni RoboMaker (34 €).

If we are looking for a robot that is immediately ready for use, we can buy Macrobot, which has a dedicated remote control and a convenient app that can be installed on iPhone and Android devices, useful for remote control via Bluetooth.
We can view this robot from here -> Macrobot (36 €). 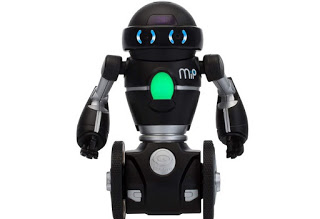 Another interesting robot that we can give away is the Wowwee Mip Robot, a prehensile robot with a tray and two self-stabilizing wheels, which we can control via the app with over 50 commands to choose from.
We can view this robot from here -> Wowwee Mip Robot (67 €).

If we are big Star Wars lovers or want to give a themed robot we can focus on Sphero BB-8 Droid, equipped with LED lights, proximity sensors, response to voice commands, Bluetooth technology and a dedicated app for controlling and programming the actions to be performed.
We can view this robot from here -> Sphero BB-8 Droid (89 €).


Ollie is a toy that can be operated via Bluetooth up to 30 meters from a special application available on iOS and Android. It is a wheel covered with a resistant and colored shell with built-in LEDs that turns and can reach a speed of 20 Km. Ollie can be up to 30 meters away from the smartphone. For more information you can look at the on Amazon (on sale at 60 Euros on Amazon).

For all the kids who want to program or study robotics when they grow up, there is nothing better than Makeblock mBot Ranger, a real robotics kit equipped with an Arduino platform, various sensors and pieces to be composed, electronic control interfaces and management via app or programmable routines.
We can view this robot from here -> Makeblock mBot Ranger (151 €).

Do we want to give a drone but don’t want to pass out for expensive professional models? We see below the best products that we can give to anyone, both children and teenagers. Most drones use the smartphone to control the video taken by the camera, but on some models we can control the drone even by moving the phone forward / backward or sideways.

One of the cheapest drones we can see is theEACHINE E32HW, equipped with 720MP HD Camera, WiFi module, sleep function, headless mode, altitude meter and remote control with smartphone support.
We can view this drone from here -> EACHINE E32HW (43 €).

Another drone very interested to give or buy is theEACHINE E58, evolution of the model seen previously and equipped with HD 720P camera with wide-angle control, folding structure, altitude hold mode, selfie mode and management via remote control with smartphone support.
We can view this drone from here -> EACHINE E58 (64 €).

Among the medium-high range drones we certainly find the Potensic, which has a 720P HD video camera and a remote control with support for smartphones, gravitational mode (we can control the drone by simply folding the phone along the axes), emergency landing take-off mode and headless mode (simplified flight).
We can view this drone from here -> Drone Potensic (79 €). 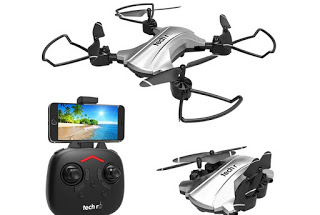 Among the most expensive drones we find the tech rc, which features a 720P HD camera, internal 1800 mAh battery, remote control with smartphone support, headless mode, simplified take-off and landing and folding wings.
We can view this drone from here -> tech rc Drone (79 €). 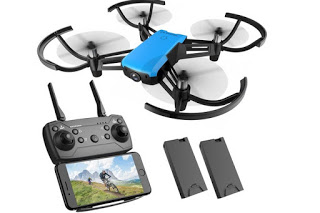 Without disturbing the professional models (much more difficult to fly), we can still buy a high-end drone like the Redpawz, which boasts 2 interchangeable batteries, altitude sensor, selfie mode, one key start, 720P camera with wide angle control and remote control with smartphone support.
We can view this drone from here -> Redpawz Drone (99 €).

Giving a robot or a drone that can also be managed by smartphone is always beautiful, especially if the child or the boy loves robotics, flying or simply playing with cutting-edge technological devices.

If we are looking for other technological gift ideas, we invite you to continue reading on our guides:
– Ideas for more innovative, useful Hi Tech gifts and to amaze
– Gift ideas of low-cost technology useful to everyone (less than 35 €)
– Best technological and original Christmas gifts, less than 50 Euros.