Best superhero games, from the game of Marvel to the Avengers to DC Universe, the best free multiplayer game

Every year a new film is released featuring one of the Heroes Marvel or Avengers who is thrown into the box office all over the world.
All the fans can play with their favorite superheroes on the computer or create new ones, both in simple online games dedicated especially to children but fun just to spend a few minutes of relaxation, either downloading games more full-bodied, more challenging, with Superhero battles in strict multiplayer mode.Breaking this article, let’s see the best online games with Super Heroes, including some excellent MMO games, to download on the Windows PC as Marvel Heroes.

1) The first site to go to know all about the Avengers is certainly the site of Disney where, in Italian, it is possible to look at the cards of Marvel superheroes in the film including Iron Man, Hulk, Captain America, Thor, Black Widow.
On the same page, there are two online flash games: Avengers vs. Gamma Monsters is Super Missiles 2.
If you understand the English language you can take the test: Which Avengers hero are you? with very simple questions that give, as a final result, the hero of the film that most closely resembles the character.
The section Marvel-Kids is dedicated to games for children, always with the avenger’s protagonists including Spiderman, Wolverine, and the X-Men.

2) The site of the Marvel is a portal of online games to all effects and just enter the Games section to scroll through the list (press Browse Games).
Among the best games, there are Avengers: Takedown, Super Hero Squad and then several games dedicated to Iron Man, Hulk, and Captain America.
The Marvel site offers all the information on the film, on the most famous superheroes and there is a nice interactive application that allows you to create your own custom superhero, Create Your Own Superhero.
You can choose the superpower, the costume, the head, the accessories, the build, choosing from the various pieces of the menu on the right.

3) On the Marvel website, you can also download the free game Marvel Heroes (no longer exists) where you can play one of the 21 most popular characters from Marvel, from Iron Man to Wolverine, Captain America and the Hulk.
Some are available for free, others can be purchased in cash.
You can also choose their costumes
The game is a 3D shooter in the third person, combining the dynamic MMO RPG and the action (similar to Diablo), with a very accurate cartoon graphics.

4) A site, unofficial but very complete, which collects Superhero games to play online in the browser is TheAvengersgames.com which divides the games according to the main character: Iron Man, Loki, Black Widow, The Incredible Hulk, Thor, and Captain America. 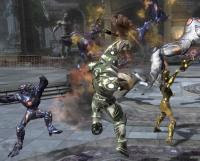 6) If you want a real game, that is not a simple flash game but a real one multiplayer superhero videogame of the MMO genre, then the choice is DC Universe Online.
DC Universe is the only real game, for PC and Playstation, where you can impersonate the superheroes of the most famous comics, which you can play in person, free, online and in Italian.
The game has three subscription plans, including a completely free one where you can create two custom characters and choose whether to be a superhero or a supervillain.
You will face different adventures alongside some of the most famous superheroes including Batman, Superman, Green Lantern, Wonderwoman and many others.
The game is in 3D, with beautiful cartoon-style graphics, very lively action, and with multiplayer superhero fights, against other online players.
DC Universe Online can be downloaded after registering on the site, with a free download on a Windows PC.


7) Another famous and great superhero game completely free is in the Steam online store: Champions Online, already described in the article on the best free games on Steam (Windows) of PvP battles with robots and superheroes.
This is a pure MMO, a role-playing game where you start by creating a superhero to improve by experiencing battles against other players.

8) Gotham City Impostors is a shooter challenge between Batman and Joker’s very fun, online and multiplayer, in a game described in more detail in another article.

How to Burn CDs and DVDs for free (Windows and Mac)

How to set up DNS on the modem