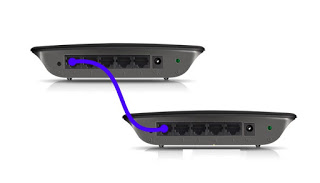 We know well that, to surf at the highest possible speed wirelessly, the Wi-Fi network signal must reach computers and mobile devices with as much power as possible. But if we live in an apartment with several rooms, perhaps far from each other, the walls are a barrier as are the basements, multi-story houses, and terraces.
After drawing the network map to see where the signal gets better and after analyzing the networks so from improve the wifi signal, instead of starting to open doors and windows, moving furniture and computers from one room to another and buying additional devices and repeaters, we can increase the Wi-Fi signal range by adding a second router to the wireless network of any make and model, to be placed as far as possible from the second, so as to cover all areas.

READ ALSO: Connect a new router to the modem without changing networks

There are two types of networks that can be implemented connecting two routers via Ethernet cable: using routers behind the same modem (therefore on a single network) or creating two separate and independent networks. The first solution is more convenient to manage while the second solution is useful if you work with different computers at home or in the office, to keep them separate from each other. Below we see how to go about amplify and expand the WiFi signal range is available with 4 notches in every corner of the house.

The installation of a single network is very simple and it is all a question of connections: the main router must be connected to the modem of the network provider to receive the internet. The secondary wireless router is connected to the main router via an Ethernet network cable.
The primary router is what was already used while the second router is to increase the signal and spread it in areas without signal.

Since the same SSID and the same security settings are assigned for the second router, no additional configuration must be made on the computers.
The wireless network remains one, is the same as before, only that the signal will be more widespread.
All shared folders, music libraries, photos, and other files will be accessible from all computers and mobile devices connected to the same home network.
If we are looking for an Ethernet cable long enough to connect the routers, we recommend taking a look here -> CSL – 10m network cable – CAT.6 (11 €). Obviously this cable will be hidden well above the skirting boards of the walls or in the conduits of the electrical sockets.

If we prefer, as mentioned at the beginning of this guide, we can also divide the wireless network into two independent networks that you don’t see each other, without sharing.
To have this configuration, the cable connection is the same but we will have to make some changes to the settings of the second router: first, we keep the DHCP, Firewall and NAT functions, then we assign as IP of the router 2 a different address, such as 192.168.2.1. For the connection we will have to set as Gateway and how DNS server the IP address of the first router (for example 192.168.1.1), so that you can navigate independently as if it were a single device. By assigning also a name of wireless network and a different password on the second router, we will have a new wireless network that has nothing to do with the first one, even if in fact they exploit the same modem and the same connection, everyone will navigate in a separate way ( the PCs present in the two network segments will never be able to see each other, including the resources eventually shared).

In this guide we have seen how to use two routers at home to expand the capacity of the wireless network, without having to necessarily have a Wi-Fi repeater or without having to move the first router.
If we look for other tricks to improve the wireless connection, we refer you to reading our guide with 10 ways to improve your home Wifi network coverage.
If the idea of ​​having home Ethernet cables doesn’t suit you, we can always use the Powerline connection to connect the two routers; to take advantage of this technology, we refer you to reading the guide on How the Powerline works, secrets and limits.
To configure a Wi-Fi access point and using as a repeater of our network, we can continue reading on the guide to Configure a Wifi access point as a repeater of the primary router.

ICloud Photo Backup, how it works