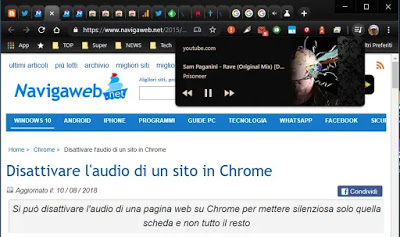 In the latest update for Google Chrome (starting from version Chrome 77) for PC a new hidden feature has been added that we could describe useful even if perhaps too simplified. These are the playback controls for videos and musica, so that you can manage listening to media content open in Chrome, even if you’re looking at another tab. This allows you to stop, pause, or skip to the next video directly from the Chrome interface and it is particularly advantageous for those who open many tabs, without being forced to search for the site where the audio comes from, without clicking frantically on each open tab or window of Google Chrome.READ ALSO: Audio equalizer for Chrome and Firefox to improve online listening

A bit like the function to mute a site’s sound in Chrome, that of multimedia controls is a somewhat hidden feature, which can escape most users if it has never been used before. The button for the multimedia control of Chrome, in fact, is not visible normally, but appears only when you open a video or start listening to music from a website.
The video control button is located in the upper right corner of the toolbar, between the address bar and the profile picture and has the icon that looks like that of a hamburger with one on it musical note.
As said, even if the feature is enabled by default in Windows 10, this button becomes available only when you start playing a video or any other audio content. So they can check Youtube videos, online radios, music from Spotify or other music streaming sites and also any advertising videos.
Starting any video on YouTube will cause the Chrome multimedia control button to appear at the top right and, once clicked, it will be possible to stop the video or go back and forth. In the control box you can read the name of the video or song you are listening to, the website from which it is played and, on Youtube, also the name of the person who put it online and a preview image.
The controls can be used from any card and gives the possibility to stop or change videos without having to go to the Youtube card (or any site that transmits audio).
In the event that there are two or more cards that transmit streaming audio, the Chrome control box gives the possibility to manage them together, therefore also to reproduce the content of one card and then that of another, all from the interface Chrome that brings together tracks and videos from every active tab in every open Chrome window.
If you are playing a playlist, there will be i in the control box buttons to pause, go forward or backward and also to go to the next and previous song or video.
Pressing the X button in the upper right corner of the box stops playback and the multimedia controls disappear.
To access the card that is playing the video, just press the title in the multimedia box, even if it is in another Google Chrome window.

On Windows 10, the media control options of Google Chrome are enabled by default. However, if they didn’t appear or if we were on a Mac, you can enable them by opening a tab with an address chrome: // flags / # global-average-controls . Then change the Global Media Controls option from Default to Enabled and press on relaunch below to restart the browser and apply your preferences.

The multimedia control options of Google Chrome are, therefore, a great way to manage what is played online without navigating between tabs and windows, minimizing interruptions if you are working or reading a site. If, however, we wanted more control, we have seen in the past that it is possible to install some extensions to listen to music in Chrome, MP3 or streaming.

How to read news and articles online that require subscription

Limit the use of Windows Defender CPUs

Alldocube iNote: the quadspeaker tablet with two Type-Cs and 4G is coming

Laptop maintenance to make it last a long time