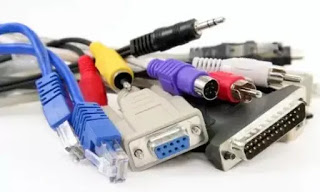 Let’s see how to order by trying to make a brief statement guide on cables that can be attached to the computer because they are many and you never know what they are good for.
There are so many computer cables, with different standards, acronyms, and terms that are often similar and often difficult to distinguish.
We may need a USB cable type A, type B or type C, a SATA cable or one of the newer ones, DisplayPort or Thunderbolt.
To distinguish the types of cables which you may need, we see in this guide which are the main ones, what are the differences between the cables and the numerous ports or sockets that a PC can have.READ ALSO: Buy cables on Amazon Basics

THE USB cables are now the standard for connecting any portable device to the computer.
You can use USB cables to attach external drives, pens and USB sticks, portable media players, internet modems, digital cameras and cellular phones to your computer.
Then the normal accessories such as mice, keyboards, webcams, microphones, printers, scanners and even some types of speakers are attached to the computer’s USB ports.
The USB cable is, in general, a transfer data from the device to the computer or vice versa or even between two computers.

The connector USB-A is the large rectangular one present at least on one side in almost all computer USB cables, the entry of the standard USB ports.
The other end of the USB cable can be the USB-B, the square connector commonly used with printers, external hard drives, and larger devices, or smaller connectors that we can call mini-USB is Micro-USB, which are commonly used with portable devices, such as media players, digital cameras and mobile phones.
USB-C it is clearly the most comfortable USB connector since it can be inserted in any direction.

Also important are the USB cable extensions, those that have the male on one side and the female on the other.
There are also other USB cables (personally never used) that have the standard USB socket on one side while on the other there is a connection to another port such as the Ethernet (network socket) or the audio jack.
If you buy an adapter from one USB type to another, the data transfer speed will be limited by the slowest connection.

READ ALSO: Which USB cables have for each function

When it comes to audio, you can indulge yourself because there are so many types of cables and especially converters that eventually lead back to two types: 3.5 mm (1/8 “) e 6.3 mm (1/4 “).

The most common cable is the audio mini-jack standard for headphones, otherwise known as TRS connector or simply audio cable.
Virtually all computers, fixed or portable, use the 3.5mm audio jack.
Most speakers and microphones can connect to the computer with these audio cables.
The computer’s microphone port is usually pink while the speaker port, where the stereo audio cable is inserted, is green.

Some computers have additional TSR audio sockets which are black, gray and gold and mean, respectively, front, rear, and center/subwoofer speakers.
They are the PCs whose sound card supports facilities 5.1.

A variety of the TSR connector is the largest one 6.3mm (1/4 “) which is the largest one, used in professional audio recording equipment, for amplifiers or microphones (even karaoke ones) which can be connected to a computer using a 1/4” to 1/8 converter “.

On Amazon, there are all the Audio cables and connectors to buy.

– In recent years all televisions, DVD players and stereos also have the digital optical audio socket.
To listen to music or if you want to watch a DVD movie on your PC, with high-quality audio, you need to connect your computer to a DVD player, a stereo or a Home Teather Doby Surround with the said connector TOSLINK (or S / PDIF) connector.
These are fiber optic cables and can, therefore, transmit digital audio through light.
Some laptops and audio equipment have an outlet TOSLINK mini-jack which can be used via a converter to connect to a standard TOSLINK (Toshiba Link) port.

– The oldest video connector of computer monitors and high definition televisions is the VGA cable.

A standard VGA connector is the 15-pin connector and is the typical and classic one with which you connect monitors to computers.
The VGA cable can also be used to connect the laptop to a TV (all new ones have this port) or to a projector.
The converters allow you to connect the VGA monitor to newer computers that only have HDMI or DVI output.
A smaller variant of the VGA is the Mini-VGA, present on some old laptops.
Here too you need a converter to connect any standard VGA monitor to a mini-VGA port on your laptop.

The VGA cable is an analog video signal cable, today superseded by digital video cables.
Even today, however, the VGA port is present on most video cards and monitors.

On Amazon, all types of Video cables

– The door DVI was the competitor of the VGA port, with the digital signal.
DVI connections are available in three types:
DVI-A can transmit analog signals, allowing for backward compatibility with VGA (useful for CRT monitors and old LCD monitors).
DVI-D can transmit more recent digital signals.
DVI-I capable of sending analog and digital signals.
In some cases, a VGA-DVI or DVI-VGA converter cable may be required.
DVI disused today, having been replaced by more modern types of cables such as HDMI, DisplayPort, and Thunderbolt.

The new generation of ultra-flat laptops like the MacBook Air had to make variations of this grip with smaller versions called Mini-DVI and Micro-DVI.
A DVI cable has 29 pins, although some connectors may have fewer pins depending on their configuration.
The video signal DVI is compatible with HDMItherefore, with a simple converter you can make a DVI monitor receive input from an HDMI cable.
Clearly there are also DVI to VGA adapters in order to connect the new graphics card to an old monitor that only supports VGA mode.

4) Audio and video cables together

HDMI cables (High-Definition Multimedia Interface)
HDMI is the standard for high-quality audio and video transmission via a single cable.
The HDMI supports a maximum resolution of 4096 × 2160p (it is only HD 1920 × 1200) with up to 8 channels of digital audio and is used for connecting Blu-Ray players to a full HD TV.
Some HDMI cables can be up to 5 meters long, and those of higher quality, up to 15 meters long which can also be increased with amplifiers.

HDMI connections are available in five types:
– The type an is the most popular, with 19 pins on the male head, compatible with single-link DVI-D connections.
– The type B, larger than type A, with 29 pins on the male side, compatible with dual-link DVI-D connections, are quite rare to find.
– Type C (Mini HDMI) is a 19-pin connector often used with portable devices, such as video cameras and digital cameras.
– Type D (Micro HDMI) also has 19 pins and looks like a Micro-USB cable, sometimes included in smartphones and tablets.
– The type E is much larger with a locking mechanism, mainly used for automotive applications.

HDMI is compatible with the DVI socket via a converter that allows you to watch videos on a DVI device using the HDMI cable even if, in this case, it will take another cable for audio.

You can buy cheap HDMI cables On Amazon

Display Port is a multimedia interface that transmits video and audio signals together, designed to replace VGA and DVI, mainly used to connect computers to monitors.

DisplayPort is compatible with HDMI and USB via adapters.
There is also the Mini DisplayPort, which was mainly used in earlier Apple devices released before 2011.

On Amazon, you can buy any kind of DisplayPort cable

READ ALSO: Differences between HDMI and VGA cable, and between DVI and DisplayPort sockets

SATA cables are used internally to connect the hard drive to the motherboard of the computer and therefore are not seen, eSATA cables are designed for external hard drives or portable hard drives, and can transfer data faster than a USB or FireWire connection.
However, the eSATA cable does not transmit power like USB does and therefore fails to power a portable external hard drive that does not have a separate power supply.
A standard SATA cable can be recognized by two connectors, each with 7 pins and an empty notch.

– The IDE cable was used before SATA cables to connect the disks to the computer’s motherboard.
It looks like a 40-pin wide cable that looks like a ribbon.

Network cables we name the old cable of the RJ11 telephone, still used worldwide for the Internet connection via modem, consisting of 4 wires, with a four-pin connector.
Ethernet which is the standard for wired networking around the world.
The Ethernet cable, otherwise known as RJ45, is based on a twisted pair Cat5 and is composed of 8 single wires.
The Ethernet connector has 8 pins and is very similar to a phone plug, thicker and wider.

READ ALSO: Differences between Ethernet cables, CAT5, and CAT6 and which ones to use

– Firewire or IEEE 1394 or also known by the names i.LINK and Lynx, it is an alternative to the USB socket and is commonly used for connecting digital video cameras and external hard disks. Firewire cables can also be used to connect PCs on a network, without a router, but personally I never succeeded when I tried.
The FireWire cable is typically 6-pin in its connector, even if there is also a 4-pin one.

– S-Video cables or Super Video are those used to transport analog data and are used to connect DVD players, camcorders and old video consoles to the TV.
S-Video cables are very useful for connecting laptops to older televisions, those without a VGA socket.
There is the possibility that the TV supports S-Video even though it does not have a socket to attach the cable to it.
In these cases, it takes a Scart converter that has this door.
The S-Video connector standards are round and can have a variable number of pins, between 4 and 9.

The connector cables RCA are represented by a group of 2 or 3 wires, which almost always include the composite video (yellow) and, always, i stereo audio cables (red for the right channel and white or black for the Sometimes in this bundle of cables there may be others for additional audio and/or video channels.

Among the video ones there can be the Component video (component video) which offers a better image than the composite because the video signal is divided into different signals, while, in the case of composites, everything is transferred via the single yellow plug.
RCA cables are usually used to connect the DVD player, stereo speakers, digital camera and other audio/video equipment to the TV.
You can attach an RCA cable to the computer via a video capture card so you can transfer recorded video from an analog video camera to your old computer hard drive.

The Molex cable has a plastic socket with 4 holes and looks like a plug.
It is a cable inside the computer that gives energy to internal components such as internal LED lights or fans.

Skip the Serial cable that is no longer used except in rare cases of hacking.

WhatsApp: news for PC, Android, chains of St. Anthony and Italian numbers for sale on the web

How to activate Parental Control on PC, smartphone and modem

Best ways to share photos privately with friends and family