Home Programs Download LibreOffice 7 for free in Italian on PC, Mac and Linux 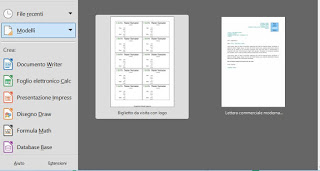 From the same Open Office developers (who rebelled against Oracle's control over Openoffice), in 2011 it was born LibreOffice, today thebest alternative to Microsoft Office, the only real possibility of being able to use programs equivalent to Word, Excel, Access and Powerpoint on Windows, Mac and Linux PCs without paying anything.
LibreOffice it is completely free and open source, therefore usable without having to buy anything even for commercial and business purposes.
LibreOffice includes several independent applications: Writer equivalent to Word, Calc for spreadsheets like Excel, Impress for presentations like Powerpoint, Draw, to draw flowcharts as with Visio, base, to manage a database as you would with Access e Math for math operations.
LibreOffice is compatible with all types of files created with Microsoft Office becoming an alternative that can replace in all respects the most famous, but not free, Microsoft programs.

You can download it today LibreOffice 7 (also from the LibreOffice page in Italian) which in this new version becomes a modern program, with a better user interface, compatible with Windows 10 and better interoperability between the different operating systems.
LibreOffice, as mentioned, is available for all three major operating systems, Windows, Mac and Linux, and can be downloaded in all languages, including Italian, by going to the download page.
For Windows PC you can also download 32-bit LibreOffice 7 (the default version on the page is the 64-bit version of LibreOffice for Windows).

LibreOffice 7, released in 2020, is a new major version that introduces new features and improvements to all programs in the suite. One of the main changes of LibreOffice 7 is the better compatibility with Microsoft Office formats docx, xlsx and pptx. The new version of the Office suite saves these documents in the native format of Office 2013/2016/2019 instead of in 2007 compatibility mode and therefore improves interoperability with Microsoft Office reducing the problems of viewing or saving documents that could occur in the previous versions of LibreOffice.
The new version of LibreOffice It has better performance thanks to the new graphics engine, has new icons and changes to the sidebar and the menu at the top, with a more beautiful interface, less spartan than before, designed in a pleasant and easier to understand way. Making a summary of the new functions of the various programs we see that:

1) Writer it is the alternative to Microsoft Word and therefore serves to write text documents to the computer, edit them, save them in different formats (including the doc and docx format).
The command interface is similar to that of Word, without a band, with the function buttons placed next to each other. The nice thing about Libre Office is the ability to create PDF from documents or to save in html.
Writer has little to envy to Microsoft Word so there will really be no use problems and no function will be missing. In the latest version LibreOffice Writer adds support for Emojis with codes that are found in the automatic correction options. There are style previews to immediately visualize the appearance of the text before applying a change.
You can now highlight text and use Word-compatible shading so that it is preserved when importing and exporting Word documents. Images can be cropped with the mouse in the interface. There is also a new menu Form, which makes it easy to create forms and save them to PDF.

2) Calc it's like Microsoft Excel, the spreadsheet for making calculations in tables. The formulas, expressed in natural language, allow you to use words to indicate numerical formulas. Even in Calc you can save a file in different formats, including Excel xls or xslx.
In the new version of LibreOffice conditional formatting is supported, new calculation functions, support for XLSX files in the import and export of spreadsheets and there are many changes to the formula generator.

4) Draw is an alternative program to Visio to draw diagrams, flowcharts and even posters to print with project plans.
Draw is also capable of editing PDF files.

5) base it is very similar to Microsoft Access, a tool to create a data database that supports MySQL, Access and other types of multi-user databases, with compatibility with JDBC and ODBC. As explained in another article, alternatives to Microsoft Access still have some limitations.

6) Math is a program for inserting math formulas into documents so as to write functions and expressions on sheets written with Writer.

Those who have never tried LibreOffice and still think that the only way to write to the computer is by buying Microsoft Office, is wrong and I can only recommend a try of LibreOffice, a formidable free program.
In another article, options to modify to optimize and customize LibreOffice.