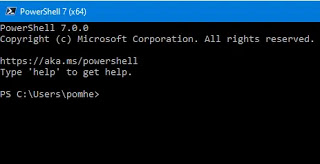 PowerShell is the Windows 10 command line interface, similar to the old command prompt, only with more functionality. Through Powershell it is possible to perform operations within the operating system, such as removing pre-installed applications and uninstalling Windows 10 system apps.
We saw in another article the differences between Powershell and Windows Command Prompt.
Powershell is a tool already installed on Windows 10, which can be started by simply pressing the right mouse button on the Start button (if in the Settings> Taskbar has not been configured to use the command prompt instead).
Although this is a component of Windows, Powershell is not immediately updated to a new version by Windows Update forcibly.
The latest Powershell 7 version can be downloaded, therefore, for Windows (to update the version already present in the system) and it is also available for Linux and Mac, for free.On PowerShell Github page it’s possible download the latest version available for both Windows 10 (32 bit and 64 bit) that for Linux and Mac. To download, click on msi in the row corresponding to the system, under the column Downloads (stable). The installation is standard and works as it would be for any other program.

If you want to do it the update to the latest Powershell 7 version, on Windows and also on Mac and Linux, you can also launch Powershell and then type the following command:
iex “& {$ (irm https://aka.ms/install-powershell.ps1)} -UseMSI”
The command will download the installer from the PowerShell page and then begin the installation.

When the update is complete, a new PowerShell window will appear and the version number will be updated at the top.