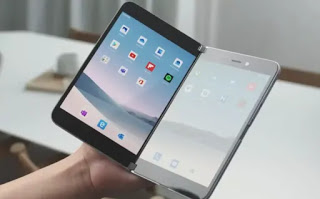 In an event in New York, Microsoft surprised the world yesterday by presenting new Surface devices that could take us into the future of computers and smartphones: the tablet and the dual-screen smartphone. The dual-screen looks like an improvement in folding device technology. Instead of having a single screen that folds like a booklet in the Samsung Fold, which could be very fragile and easy to break, we have two separate screens, but they interact with each other as it does with the extended desktop of two monitors connected to a computer. Having two screens, therefore, allows you to perform different tasks simultaneously such as, for example, being in a video call with someone and working on a document or playing with the controls on one of the screens or even keeping two applications open at the same time without sacrificing the space as when using one screen.
The two Surface devices are the Surface Neo, an Ultra-portable dual-screen PC with a folding keyboard which will have as its operating system a special version of Windows 10 called Windows 10X and then the Surface Duo, even more, surprising because it is the first dual-screen Android smartphone.This Surface Duo smartphone it is, therefore, the size of a smartphone when closed with a booklet, with two 5.6-inch screens connected by a hinge that rotates 360 degrees. The Surface Duo can then be transformed into a miniature tablet with an 8.3-inch screen and can be folded in such a way as to have a screen both in front and behind, with an amazing effect. The Duo can also be closed completely without leaving the screens in sight, becoming also the first smartphone that does not need a cover to protect its screens. Apps can be run separately on each screen or displayed on both.
From the presentation video at the bottom, you can preview how the Surface Duo is and how it can be used.


For what concern Surface Neo portable, instead, the most interesting part of the presentation concerns the new version of Windows 10, Windows 10X.
Windows 10X presents a new interface with the redesign of the Start menu, taskbar and UX rebuilt from scratch with PCs in mind. Windows 10X can still run normal traditional Windows programs without problems, so it will be absolutely compatible with current applications and older software. Microsoft claims that Windows 10X will only be available for new folding PCs and will not arrive on today’s normal computers.
Also to present the Surface Neo Microsoft has published a video that really seems to come from a science fiction film


When will these dual screen Surface devices be on sale?

If after watching the presentation videos we had the irrepressible desire to buy or at least book the dual-screen smartphone, we must let it pass, at least for now. Both the Surface Neno and the Surface Duo, in fact, will not be on sale before a year, with a release forecast made by Microsoft that talks about Christmas 2020.
Certainly, with these announcements from Microsoft, the technological evolution of portable devices has been relaunched which had been at a standstill for several years and we will have to imagine 2020 full of novelties, given that companies like Apple and Samsung will certainly not be watching.

To find more details about dual-screen devices and Windows 10X, you can read presentation articles on the Windows blog.

One Bullets Wireless Z2: official neckband with 30 hours of autonomy

Banned from Facebook and deleted accounts for no reason: how to fix it

Build 2022: many new features are also coming from Microsoft for Windows 11