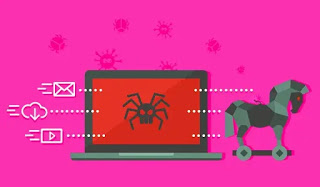 Among the types of malware that can complicate a PC, one of the most annoying, harmful and problematic is that of Trojan or Trojan Horse, which literally means Trojan horse. Trojan is a particular virus, which infects computers via downloaded mail attachments or software from Internet. Its main effect is to destroy, delete or make inaccessible files stored on the disk, secretly and without being noticed.
The main difference between a normal computer virus and a Trojan horse is that the latter is not specifically developed to spread and replicate. The Trojan virus, on the other hand, is worse, usually represented by an infected software or file that has the purpose of damaging the computer and causing problems such as killing background system processes, deleting hard disk data and corruption of the operating system. Today the most common type of Trojan is that of fake software that promises to optimize and improve PC performance or provide an antivirus scan, while in reality it does nothing but block everything. Sometimes the Trojan can ask for payment of the ransom to free the locked files and in this case it is called Ransomware.

What is a Trojan Horse

Mostly, Trojans are introduced into systems via email attachments. They spread in the form of masked e-mails in order to appear authentic, containing an attachment that once downloaded and executed infects the computer and damages the system. A Trojan can also be downloaded when installing a program from the internet which is why you should always be careful where you download the software.
Trojans can have multiple uses, which depend on the reasons for who created the malware: identity theft, data theft, computer crashes, espionage or monitoring of user activities. Although usually any antivirus is able to intercept a trojan, which by its nature is well recognizable, their spread is still high, partly because many inexperienced people leave their antivirus not updated or disabled, partly because , if the software runs before the antivirus can detect it, it may already be too late. It is no coincidence, therefore, that the so-called Trojan Ransomware (the viruses that encrypt files and ask for a ransom in money) have spread so much in the world. Furthermore, they also do not replicate, they can be linked to a virus that will spread the trojan to other computers over the network.
Installing valid antivirus software, keeping it up to date, being careful when opening e-mail attachments from unknown addresses or with strange names and paying attention to security messages sent by the antivirus itself, are some of the ways to avoid being hit by Trojans .

To prevent your PC from being infected by a dangerous Trojan Horse, it is not necessary to install an antivirus, it is only necessary that the Windows Defender antivirus is active in Windows 10. The antivirus integrated by Microsoft in Windows 10 is absolutely able to block the execution of malware and Trojans, it automatically updates with the Windows Update process and has almost no impact on overall system performance. In addition, Windows Defender also includes Antiransomware protection in Windows 10 which, if activated, prevents any execution of potentially dangerous files and programs. This security function can be recommended on company computers and on the PC of those who are less experienced.
In case you want an external antivirus, in another article we have seen i best free and reliable antivirus.

Eliminate a Trojan
Depending on the type of Trojan, it can be more or less difficult to manually remove the virus. below we see a summary of the basic steps to eliminate a Trojan, referring to the general guide to remove a malware manually written some time ago.

READ ALSO: Restore files and system settings after a virus or malware

Windows Defender does not work or crashes: how to fix

How to connect a monitor to a laptop

Official Telegram Premium: here are the functions offered and the asking price