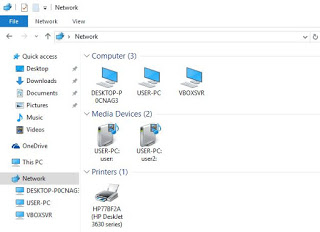 On Windows 10, network detection is a feature that allows you to quickly find devices connected to the network using File Explorer (i.e. seeing other PCs connected to the same network as if they were folders on the computer used). When the function is enabled, you can open any folder and then expand the section Network on the left column of File Explorer, it's possible view all networked devices, including routers, network disks or other PCs and of course browse some folders and files, shared ones or printers.
The Windows 10 feature of network discoveryhowever, even if very simple to activate, it may not work correctly if some conditions are not met or if there is some wrong configuration in the settings. It so happens that not all the computers or devices that we would expect to see are identified or that the computer we are using is not seen by others.
Whatever the reason, almost all problems can be solved by identifying the network, first of all, making sure that the functionality is enabled and that the required services and protocol are running.

READ ALSO: How to share files and folders on a computer network on Windows PC

To enable network detection, you still need to use the Control Panel (sooner or later in Windows 10 the Control Panel will be removed and the functions will be in Settings under the Network section).
From Control panel, click on Network and Internet, then on network and sharing center.
Then press on the option Change advanced sharing settings in the left pane to open a very spartan options screen, where you can expand three sections: Private, Guest and all networks.
For security, it's always a good idea to turn off network sharing below Guest o Publish and also under All networks, you must therefore expand the section of the private network to find the option that activates network discovery, with option for automatic configuration.
In the section below, also activate the File and printer sharing"and press down on Save Changes .
Once the steps are complete, opening a folder and expanding the section Network, you should already find other computers and gadgets connected to the same local area network (or connected to the same router).
If network discovery is enabled and File Explorer does not show any devices, it means that one or more of the requested services may not be running.

An important thing to make network discovery work is that the network used, the wifi network for example, is set as a private network. We have seen in another article how set up the private network in Windows 10.
As explained, it is possible to share files between PCs and see shared folders (Windows, Mac, Linux) and to share folders of documents, images and music

To enable the services, you need to search, in the Start menu or on the search bar, Services.
When the list of services opens, look for and check that they are "running"the following services:

If one of the services is not running, double click on it, select the type of automatic start and press on Starts down.
After completing the steps, open the Network folder in File Explorer to see if the detection works or if you still don't see anything.

If network detection works, but some devices are missing, such as an old computer, a network-attached disk, or a Network-Attached Storage (NAS), those devices may have relied on the old version of the Server Message Block (SMB) protocol. .
However, keep in mind that it would be better not to use the protocol SMBv1, which can still be activated in Windows 10, for security reasons. To activate it, go to Control panel > Programs and press on Enable disables Windows functionality. Here you can find the component SMB 1.0 / CIFS Client to install.

Before trying to activate SMBv1, which as mentioned is an already insecure and risky protocol, it is still advisable to run the automatic network troubleshooting tool that is included in Windows 10.
By opening the Settings, section Update and security, press on Troubleshooting and then, on the right, press the link Additional troubleshooting tools .
Among the various tools, press on Network card and run the tool for the wifi network used. Do the same with the tool to solve problems Shared folders.

If the troubleshooter didn't work, you can use the network recovery feature that removes and reinstalls all the network cards on the computer. This process restores all network components, restores factory defaults, and resolves network discovery problems.
The only side effect of the reset is that the wifi access passwords are reset, which will therefore have to be rewritten.
To reset the network card settings in Windows 10 there are several ways; the simplest is to open Settings, going up Network and Internet, then on State and press the button on the right Network restore.

If it still hasn't worked, I refer you to the guide for solve network problems, connection between PC and file sharing, so that you can start over from step by step.

How to Download Fonts to Install on Windows PC