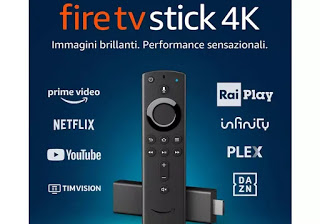 The Fire TV Stick, released in Italy in 2017, has immediately become one of the most useful technological devices ever in the home, an economic tool to add applications to any normal TV, as much better than any Smart TV. The Fire TV Stick connects to the TV’s HDMI port, is powered by a USB port and is therefore compatible with any Smart or non-Smart TV, even 10 years old (as long as it has an HDMI port).
With the Fire TV Stick, not only can you comfortably watch Youtube videos and Netflix movies on TV, but you can also install smartphone games and other Android apps through a store that does not have the limitations of modern Smart TVs. In another article we saw the guide to install all Android apps on Fire TV Stick, so you can open video sites, games, Facebook and even special applications to watch movies and soccer games.

The novelty of these days is that, finally, Amazon has put for sale in Italy two new versions of Fire TV, that one with Alexa voice commands is the enhanced one that supports watching movies in 4K.

The normal Fire TV Stick it’s the same version that has been on sale for the last two years, with the only difference being a new remote control that, compared to the previous model, has the buttons to change volume and to call up voice commands. Taking advantage of the Alexa app integrated into the Fire TV Stick, you can then press the microphone button and talk to the remote control to open the various applications such as Netflix, to start playback, to stop it, to go to the next video or go back and even for to do research. Voice commands work best with the Amazon Prime Video app which also supports more complex requests.

The 4K Ultra HD Fire TV Stick instead, it is a more powerful device than the standard model. While the normal Fire TV Stick has a maximum resolution of 1080p, this Fire Ultra HD allows you to watch movies and videos in 4K resolution, with maximum video quality if it is supported by the TV you are using and the application (for example Netflix can transmit in 4K). The Fire TV Stick 4K also has a different processor, slightly faster than the standard model (the responsiveness could, therefore, be higher even if there is no big difference to be expected).

Who already has the old version of Fire TV Stick you may wonder if it’s worth buying one of the two new models. As for the basic version, as mentioned above, only the remote control with voice commands changes, which can also be purchased separately for only 15 euros (The Fire TV remote control on Amazon).
If you have a new TV that supports viewing in Ultra HD quality, on the other hand, you may find a marked improvement in the quality of streaming video on Netflix, Prime Video or Youtube by buying the Fire TV Stick 4K, which also improves the sound quality. If you don’t have an Ultra HD TV yet, then buying the 4K Stick version becomes virtually useless.
As for the voice commands, these are linked to the remote control with the microphone button and work on all the Fire Sticks, even the old one. In theory, then, the integration of the Fire TV Stick with Amazon Echo devices should finally be active, in order to be able to control the video playback with the voice without necessarily using the remote control.

TCL announces new 2022 soundbars for all tastes and needs