Home Windows 10 GPU planning in Windows 10, how to activate it and what it... 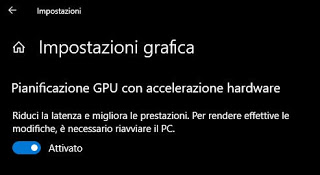 Who installed the latest update of Windows 10, may have noticed, going to browse in the Settings, a new rather inviting option to activate, even if not at all clear in its operation: the GPU planning with hardware acceleration. This option, quite hidden, describes itself as a way to reduce latency and improve performance and it is really difficult to resist not activating it given the premises.
But if we're wondering what it actually does, what GPU planning means with hardware acceleration and if it can actually improve performance or if it can cause problems, let's understand something more.

GPU planning goes back to the introduction of the former Windows Display Driver Model (WDDM) allowing applications to be able to send their work to the GPU without queuing up, but with a more intelligent system made, they assign variable priorities according to the type of program used. In other words, very simple, to give games and graphics applications the priority in using the video card. The only problem was a certain delay in the interaction between GPU and CPU, which however remains the central component of data processing (and I don't go further because you really get into the technician, besides my skills).
However, with the Windows 10 update of May 2020, a new GPU planner was deactivated by default, but activated by the user that allows, with the right hardware and drivers, to be able to download most of the programming graphics on a dedicated GPU-based scheduling processor.
If you want to understand more (I understand that it is not clear), you can read the explanatory article on the Microsoft developer blog.
According to some tests, with this option activated in a high-level computer and with a powerful video card, you can get a gain between 1-2 frames per second while running a game, which is not much, but, if not there are contraindications, it can be fine.

Anyway, if you want to try ad enable GPU scheduling with hardware acceleration, just open Windows 10 settings, then go to System> Screen and on the right side press the link Graphics settings. Note that this option appears only if you are using a computer with compatible hardware and, precisely, with a recent video card from NVIDIA.
If you don't see the option and still have an Nvidia Ge Force video card, download the latest driver for the GPU from the Nvidia website or using the update program already installed.
Personally, after activating it, I have not noticed great improvements but, fortunately, not even problems or deteriorations. This is probably an activation that benefits the most during video games on high-performance computers, which does not have much effect in daily work.
Given the novelty so interesting even if mysterious, let me know your impressions if you try this option on your PC.

READ ALSO: How to improve the performance of your Windows PC

Solana Saga: the super secure smartphone for NFT and cryptocurrencies is coming

Gamers on Nintendo Switch Sports sneak around in profanity

How to use Teamviewer: remote control, assistance and videoconferencing