Home Android Guide to configure Android Auto in the car 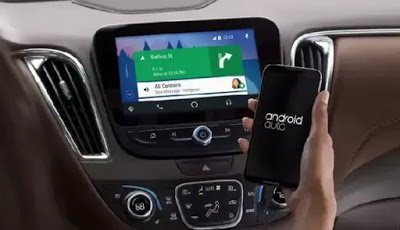 Android Auto is the main integrated system in the car radios “In-car entertainment“, the modern ones that are now mounted in almost all new cars, which have a touch screen as big as a tablet and allows you to connect to the Internet independently or via smartphone.
Android Auto is the most widespread system on machines all over the world especially because, compared to Apple Car Play that only works with iPhone, it is compatible with all Android phones, then Samsung, Huawei, Motorola, etc.
On the official website of Android Auto, you can discover all the brands of machines that support this In-car entertainment system, including Alfa Romeo, Opel, VolksWagen, Smart, Seat, Skoda, Renault, Peugeot, Mercedes, Kia, Fiat, Ford, Citroen, and many others.Car radios with Android Auto require, to work, that any Android smartphone is connected to the machine via USB cable so as to project on the car screen a reduced and simplified Android interface.
From this simplified interface, you can make phone calls, read and reply to messages, start streaming music and then use the satellite navigator, which is the most important app in the car.

As seen, Android Auto can be used as an app even without compatible car radios, perhaps by attaching the smartphone to the car’s air vents with magnetic support. But who has a compatible car radio system with a touch screen can instead take advantage of all its functions, to make hands-free calls, reply to messages and set the navigator using only voice commands.

Before configuring the Android radio in the car and connect the smartphone with the USB cable to the socket located under the dashboard, be sure to install theAndroid Auto app on the phone that you can download for free on Google Play Store (only on phones with Android 5 and above).
The Android Auto app is configured automatically and requires only a few steps to get started right away.

From the settings menu, it is, however, possible to decide how the application should work, both in the case of use with a car radio, and in the case it is used alone without a connection. To access the settings you have to touch the button with three lines at the top left. In the settings, it is important to activate the option to use the voice commands with OK Google (which becomes the command to call up the system), the configuration of the automatic reply and then the automatic start of the app when the phone’s BlueTooth connects to the Bluetooth of the machine. In the settings, there is also the possibility to manage connected cars with the option to start an automatic configuration when the phone is connected to the car.

Once the Android Auto app is installed on your phone, it’s important that the smartphone is connected to the internet.
If you have a car with an Android system, simply connect the smartphone with the charging cable to the USB port of the machine to see the Android system appear on the car radio screen. No need to start the app on the phone because the system should automatically recognize the connection with the car.

READ ALSO: Connect the smartphone in the car: support, music, speakerphone, and charger

If this connection does not work and nothing happens when the phone is connected to the USB socket of the car you can try again using another cable or trying to get a wifi connection on the phone. In case of problems, try configuring another Android phone and then, if it works, try again with the one that didn’t work.

In addition to the cable connection, you must also pair the car’s Bluetooth to the phone’s, which allows you to listen to calls and music from the car radio speakers. The configuration of the Bluetooth connection is initiated when you connect the phone to the machine via USB cable, or you can do it manually.
To make this pairing you have to open the BlueTooth settings on your phone and pair the car system which should be recognizable and appear in the Bluetooth scan (for example Opel IntelliLink).
If it does not work, try pairing from the car radio settings (search using touchscreen controls on the screen).

If all went well, the Android car radio screen will show a clean interface with date and time, with four buttons at the bottom and the microphone icon at the top. The round button is used to exit the application and return to the machine’s radio system. The arrow button opens the browser (which can be Google Maps), the handset button is used to call, the headset button to start the music app (which can be Spotify or Google Music or others).
The functions of Android Auto can, however, be activated by voice, saying first “Ok Google” and then the command that can be: go to the course to open the browser, call Marco or Send a message to. In another article the guide to activate and configure Ok Google on the phone.
While connected to the car radio, you can still use the smartphone in all its other functions without necessarily disconnecting and closing Android Auto.

Programs to create a business card or badge