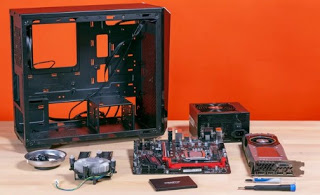 Do we need a new PC but we want to assemble it with us, without having to necessarily buy a preassembled (which inevitably will have some too cheap component)? Then you have come to the right guide: here we will show you what to buy to have a good, high-performance PC at home with a maximum cost of € 600. This computer must be powerful enough to be able to run all types of programs without any problems, even the heaviest ones (like Photoshop, CAD programs, and management programs), so you can use it for university studies or as a home PC. The € 600 PC won’t disdain even a few video games, since we are going to place a good dedicated graphics card, but don’t expect a maximum resolution and maximum details on all games. The assembly is really very simple and we can run it without problems since in most cases it is enough to arm yourself with a good set of screwdrivers.

READ ALSO: Build yourself a perfect PC to buy on Amazon

For the guide we will not take into consideration the pieces outside the computer, that is keyboard, mouse, Windows license and monitor that we take for granted we already have.
We will show you three configurations: one with an Intel processor and an NVIDIA graphics card, one with a processor and graphics card both signed by AMD and the last to create a powerful office PC without a dedicated graphics card, so that you can choose the one that best suits our needs. We can of course also “mix” some components (video card, RAM, SSD, etc.), but we pay particular attention to CPUs and motherboards, which must be compatible with each other; in this regard, we invite you to read our guide to Differences between AMD processors and Intel Core CPUs.

If we want a PC with a new generation Intel processor and a dedicated NVIDIA video card, here is the complete list of components to buy for the € 600 PC.

With a charge of € 585 we can create a powerful PC with a latest-generation Intel CPU (with 6 physical cores), a motherboard with support for all the latest technologies, 8GB of DDR4 RAM, a very large power supply, a classic SATA type SSD from 480 GB and an NVIDIA video card with automatic overclocking and 4 GB of video memory, so you can start any 3D program and play almost any game (adjusting the settings to medium).

If instead we want to save something but we don’t want to give up creating a powerful PC, we can create a computer with all the main components branded AMD, ie processor, and video card. In terms of performance, it will be practically identical to that seen a while ago, but we will have saved something and we will also have a slightly more powerful video card than the Intel configuration. Below we can find the list of components to buy.

With a charge of € 579, we will have created a very powerful computer with two video cards (one integrated inside the CPU, the other dedicated), so as to be able to play some modern game or start some program with 3D acceleration without any problem. The rest of the components is identical to the Intel PC, with the only difference that the motherboard is slightly smaller than the model examined for Intel (for AMD the motherboard has a micro-ATX form factor, however compatible with the case chosen).

If we want to build a complete and powerful office PC, we can save the money of the dedicated video card (in any case we can use the one integrated in the processors) to choose a faster processor, increase the amount of RAM or focus on M.2 SSDs, so as to achieve superior performance when we open multiple programs simultaneously. To create the office PC, let’s stick to the following components.

Spending only € 546 we will have an extremely powerful office PC, with an AMD CPU equipped with 6 physical cores and 12 virtual cores (managed by the operating system), 16 GB of DD4 RAM, a 500 GB high-performance M.2 SSD (to be reserved for operating system and programs) and a classic SSD with a 480 GB SATA cable (to be reserved for personal data). Hard to get a more powerful office PC with these figures, without forgetting that the AMD CPU also integrates a good video chip to run the 3D acceleration of the heaviest programs.

With an expense that does not exceed 600 euros, we can build as many as 3 different PCs with carefully chosen, balanced and economic components but able to offer us so much power in all situations and with the certainty that it will not age immediately, given that the components chosen should be sufficient for the next 3 years (if not more).

If we want to save even more, we invite you to read our guide to components to buy to get a nice 300 Euro PC. If, on the other hand, we don’t care about expenses and want to build a very powerful PC spending a lot of money, we suggest you read our article on Which is the most powerful PC with the absolute best hardware (which you can buy).

If instead, we have difficulty assembling our computer, we can get help from the steps described in the Guide to assemble a PC and assemble the computer parts.