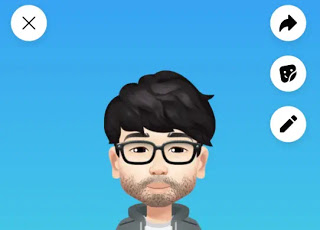 A new, rather hidden, feature has been released on Facebook that allows you to create the avatar of yourself, customized as you wish. The avatar is a character drawn like a cartoon that can be created from scratch by composing various parts of the body and face and used as an emoji in chats and comments. While there are several, many applications and websites for creating custom Avatars, Facebook ones can be created directly from within the application for Android and iPhone.These Facebook avatars can therefore be used as adhesive stickers in comments to friends’ posts, so that they can express themselves in a personalized and unique way, with a face that resembles ours (or as you prefer) and also within the Facebook chat Messenger.

READ ALSO: App to create Avatar of myself on Android and iPhone 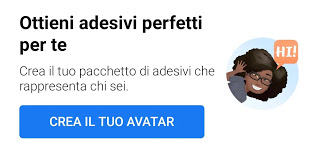 To create the avatar on Facebook it is therefore necessary to use the Facebook application on Android smartphones and tablets or on iPhone / iPad and then open a friend’s post as per enter a comment. Instead of writing the comment, you can press the smiley button (the one in the writing box, not the one on the phone keypad) and instead of sending a Sticker, tap on the button facet with tongue out at the top to enter “Create Avatar” mode. Now (wait if the loading is not immediate or touch on the white) you can press the blue button: Create your avatar.
The procedure for creating the avatar is guided and allows you to choose: skin complexion, hair cut (short, medium, long, straight, curly, color), the face shape and chin, eye shape, eye color, eye make-up, eyebrows, glasses, nose shape, mouth shape, mustache and beard, the build (here you can select the body for women or men), clothes (male or female), hat or headdress.
At the end, press the v key in the upper right corner to save the Facebook avatar.
After creation, you can see the avatar generated by Facebook, touch the pencil button to edit it or press the button to view all the stickers with different expressions that can be used. The avatar will then be smiling, angry, with tears and with all the various facets of the preconfigured stickers. You can also set the avatar as a profile picture by pressing the arrow button.
The avatar is automatically saved and becomes usable in Facebook comments pressing the button of the laughing face with his mouth open (which is added to the GIF and stickers buttons).
Note, then, that once the avatar is created from the Facebook application, this also becomes available to comment on posts on the Facebook site. Open the Facebook site on your PC, click on the comment box below a post and then press the stickers button to notice the appearance, among the categories of stickers, of the face laughing with the tongue out, which represents the avatar of Facebook.

If you want send the Facebook avatar to other apps such as Whatsapp or other chats, you can do this by pressing on Edit Avatar from the Facebook app (not on Messenger). While editing, press on the sticker button, touch one and then press on Other options. The standard sharing window will then open, allowing you to send the personal avatar emoji to Whatsapp or other applications.

Facebook emoticons are pretty standard in design, in fact they are very reminiscent of Bitmoji’s personalized emojis

However, I personally think they are better the animated stickers by GBoard based on our photo.
Cuter than Facebook avatars are also custom 3D Animoji

READ ALSO: Turn photos into Emoji with our emoticon face for Whatsapp and Facebook

How to move photos from Android to Mac