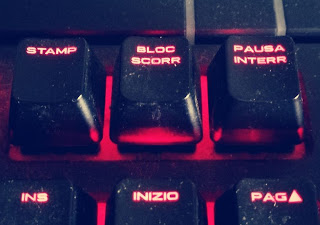 In the upper right corner of the PC keyboard, you will notice some keys that, almost certainly, we have never used: Scroll Lock and Pause. While the nearby Stamp allows you to take pictures of the screen and can always be useful, Scroll Lock and Pause they are truly an ancient residue of functionality that is rarely used today. If we want to optimize our computer keyboard, it is worth not only knowing what they are for, but also and above all to make them useful for performing quick actions that we do every day like opening a program or silencing the audio or even updating a web page as much to give some examples.

Although we have already explained in the past what the buttons Pause, Scroll Lock and Stamp are used for, it is worth resuming the discussion.

The Scroll Lock key or, in Italian Scroll Lock, it is used to activate / deactivate the movement within a page (for example a Word sheet) using the arrow keys, without moving the cursor. Today, however, the arrow keys work automatically based on the context and the key Scroll Lock it has become almost useless with one exception: Excel. If you use Excel, with Scroll Lock disabled you can use the arrow keys to move the cursor between cells, while if it is enabled, the arrow keys scroll the entire page of the workbook inside the window. Bloc Scroll is used so little and rarely that in many laptops, where the keyboard is more compact, it is not even inserted.

The same can also be said for the button next to it, Pause or Pause Interr, which is probably the cleanest key on any keyboard. The Pause button is mainly used by those who use programs such as the command prompt to stop the execution of a command. Also if you press the keys together Windows and Pause, the system properties window opens. Since for most people it is useless, it is worth changing its function to something more useful.

How to remap the keys

We have already written a guide on this topic, explaining how you can change the keys on the computer keyboard or disable them.
To do this, a new free Microsoft program was released recently, Powertoys for Windows 10, which among the many functions included, also allows you to assign different actions to the keys. In this way, you can use the Scroll Lock and Pause keys for many different activities such as:

To remap keys with Powertoys, after installing and starting it, press on its icon near the Windows 10 desktop clock to open the configuration interface. On the left side, press on Keyboard Manager and activate it using the switch. At the bottom, press the key Remap a key. Then press the key with the + sign and then on Type Key.
At this point, press the key to be remapped, which in our case is Scroll Lock and then press OK.
On the left side, instead of pressing on Type a Key to choose which key should be executed when pressing Scroll Lock, it is better to click on the drop-down menu below to be able to select the action that the button must perform. Scrolling through the various actions you can find those to turn off the volume, to use the zoom, to start playback, to stop it, to suspend the PC (Sleep) and many others. Select the one you want and press OK.
The same thing can be done to assign different functions to little used keys like Pause, Ins, Block num, Start, end or others.
The change of function of the keys can be canceled at any time from the Powertoys Keyboard manager, deleting the mappings or deactivating it with the switch.

How to start a program with a button

Start a specific program using only one key on the keyboard you can't, but creating a new key combination absolutely yes. To do this, right click on the program shortcut on the desktop and then go to Property. In Property, you can press on the "shortcut keys" line to create a key combination that opens that program.
To choose the key combination, press on the shortcut key text box and then press a key such as Scroll Lock (Pause cannot be used here). Automatically Windows creates the combination "Ctrl + Alt + Scroll Lock"in the box. Confirm with OK and then, at any time, you can open that program by pressing the keys together CTRL ALT and Scroll Lock.
Just make sure not to delete the link to which the properties have been changed, otherwise the shortcut will no longer work.

How to connect the Smart TV to the Internet