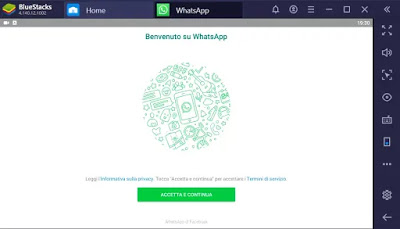 Being the most used message app in the world, Whatsapp is also widely used to make free video calls from your smartphone, although it cannot be said that it is the best app for this particular function. Not that Whatsapp’s video call is of bad quality, but it is certainly very limited in its options, especially when compared with other similar applications like Facebook Messenger and Skype.
The main limitation of video calls and even voice calls with Whatsapp is that these do not work as a computer, since the web version of Whatsapp only has chat with messages, but does not support calls or video calls. Even if it’s not really comfortable, there is still a trick to make video calls and voice calls Whatsapp from your computer like you would from a mobile phone.

How to make video calls Whatsapp from a smartphone

Make a video call on Whatsapp from your Android smartphone or from an iPhone it’s very simple: just touch the card Calls, then press the handset key with + on the bottom right and choose the contact from the phonebook. You can press the handset next to the name to make a call or touch the camera icon to make a video call. Only the first time you will be asked to authorize Whatsapp to use the camera’s phone and microphone (on Android).
In the video call, we will see a great resumption made by the camera of the mobile phone of the person we are calling, with a small window at the bottom where our face appears in the video.
During the video call, you can press the camera icon to switch between the front camera and the back of the phone.
It is also possible to deactivate the video so that others can no longer see it, or block the audio, so as not to allow others to hear what we say.

With the Whatsapp app you can also do make group video calls: you can then open a group, tap on the handset icon, then select up to 3 contacts from the list by touching them and then start the call or video call using the respective icons that appear next to the faces of the selected people. A Whatsapp group video call can have up to 4 participants together.

How to make video calls Whatsapp from PC and Mac

These functions are not available on Whatsapp Web from PC, where the call and video call functions are missing.
To make WhatsApp video calls from your computer, so you don’t need to install the WhatsApp mobile app in an Android emulator so that the computer thinks the app is installed on a mobile phone. Using Whatsapp from the emulator, it will enable the function of the video call using PC and Mac webcam and microphone.
Installing an Android emulator on a PC is very simple, requires no configuration and you only need to download and install the free program BlueStacks of which I had already spoken.

Download BlueStacks from the official site and install it on your computer. The emulator is started automatically and will present itself with an interface similar to that of a smartphone or an Android tablet, with the store and some apps already installed.
To download Whatsapp, you need to open the Google Play Store or the Application Center which is a special store dedicated to apps and games that work well on Bluestacks. In both cases, it is necessary to log in with a Google account that can also be a new one, different from the one used on the smartphone.
After downloading and installing Whatsapp on Bluestacks, you can start and configure it by following the instructions on the screen that will require you to enter the phone number to confirm the identity. Note that by accessing Whatsapp from a PC with Bluestacks, it is deactivated on your phone because Whatsapp allows you to use the app only from one device at a time and you cannot access it simultaneously from two devices (unless you use Whatsapp Web).
In the Bluestacks Whatsapp, you will also be asked whether to load the backup that the app does automatically from your smartphone. If you choose to restore the Whatsapp backup, you will find the contacts, otherwise, Whatsapp will be completely empty. In this case, you will have to add the number of the person to call or video call in the phone book to be able to find it in the Whatsapp contact list.
As we have seen above, each contact can be contacted by the PC by making the video call or the voice call. Only the first time will be asked to authorize the app to use the PC microphone and the webcam. The call will start immediately and appear exactly as it works from the mobile app on your phone. The main advantage of video calling from the PC with Whatsapp is that you can enlarge the screen to see the video image of the person called beautiful big.
Once the call is over, to re-activate Whatsapp on your smartphone, just log in again.

If BlueStacks does not work properly or you want to try a different program, we have seen in another article the best emulators for Android for Windows. The advantage of Bluestacks, however, is that Whatsapp can be easily downloaded from the store, while in other emulators it may be necessary to download the apk for manual installation.
As mentioned above, there are many applications for making video calls in addition to WhatsApp, some of which also support web video calls without the need to install an emulator. Facebook web Messenger and Skype Web are two examples of apps with web versions that support calls and video calls.

If WhatsApp backup won’t restore, how to fix

Use 7Zip to open ZIP, RAR and compressed file folders