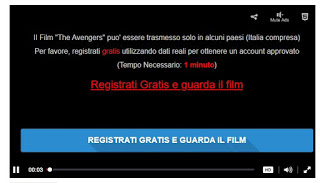 On the internet you can find everything and talking about streaming movies, there are two categories of websites: the regular ones that have the license to broadcast them and the ones that, instead, incorporate pirated videos and include links to view them online or to download them to your computer. Until several years ago, it could have been really convenient to search for these websites, while today there are really a lot of contraindications: meanwhile, beyond ethical and legal issues (it is in fact an illegal act to see pirated films), to search for a movie on websites irregular, carries great security risks, not only for their computer, but also for the same people who can easily run into sensational scams. In addition, in recent years, many regular video streaming sites have come out, such as Netflix or Disney +, which however have prices accessible to all with subscriptions that, among other things, can also be shared among more people by paying half.
Given the numerous dangers hidden in this type of site, you have to be very careful both when you happen to be by chance (in fact it is easy to find them by doing a search on Google with the title of the film and the word streaming nearby), and when you go there on purpose to try to see a film just released at the cinema or an old TV series that is no longer broadcast by any regular TV or service. Let’s see then how to recognize these illegal sites with streaming pirated movies and how to behave, to avoid risks, when there are requests to register or download programs.1) Poor graphic appearance
The first thing that stands out when opening a non-regular site is the spartan, uncared for, minimalist graphic aspect. Those who take care of this type of site do not waste much time creating an interface to Netflix, but only put a list with the covers, a description of the film taken from Wikipedia and then the links for viewing.

2) Advertisements everywhere
On illegal streaming sites there is a disarming amount of advertising. Sometimes it is clearly visible with many misleading banners, often where the words “Watch for free” or “Download” appear which lead users to click on them, while other times they are hidden and appear as terribly annoying popups and popunder. So just a click anywhere on the site to open a new browser tab with advertising (sometimes it is also advertising for adult sites).
There are also cases in which advertisements continue to appear even after the first click or after clicking one of the links that should have led to seeing the film. In the end, dozens of pop-up and pop-under ads accumulate, making it even difficult to understand where the site should have taken us to see the video for free.
To visit these sites and others, it can be useful to know how to block pop-ups and automatic redirects on Chrome and Firefox

4) Click infinite links
Some of the illegal streaming sites are pure scam: there are lists of films, there are also links to view or download them, too bad that clicking on them ends up in advertising pages and nothing else. At best, we end up clicking endlessly on links that don’t seem to go anywhere, which lead to advertisements to download malicious software or end up stuck in a cycle of dead-end sites that point each other in the hope that the user ends up clicking the download or sharing personal information.

5) Fake registration to the site
The worst case is that of advertisements hidden in order to steal personal data: a link is clicked to view the film and a video player that seems normal opens; pressing play starts the initials of the manufacturer (for example the word Universal) making everything seem regular, but then after a minute he stops and asks to register to continue. Registering an account, however, has nothing to do with the site you are looking at and it doesn’t even serve to watch the film, it is just a fraudulent way to collect email addresses and other data. That of the account registration form is perhaps the worst deception of illegal streaming sites, also because it seems completely legitimate and is difficult to recognize. In some cases it may even lead to ask to enter your credit card details, therefore going to steal our money.
I had already talked about this problem in the past explaining why you should never register with illegal streaming sites.

6) The section of the “who we are” site, if any, has no disclaimer
Usually this type of site only says that inside it does not host any material, but that it only connects to other sites where the films are present. For the record, illegal films are often uploaded to uncontrolled hosting platforms such as Openload or Mixdrop (even this type of site is often closed or obscured).

7) The site address is strange
Illegal sites, by definition, publish content that they are not licensed. Therefore, these are sites that fight every day with the authorities who can obscure the site and block it. To get back online, these sites are constantly changing addresses, leaving with increasingly strange domains that do not end with .com, but with things like .love, .sh, .kim, .services and so on. The site name is always the first clue to an illegal streaming site (even if it ends with a normal .com) and can be recognized by the words “gratis”, “free” and so on.

8) The browser reports a security problem
If Chrome or Firefox or Edge report security issues, it is best to close the site you are visiting immediately. The same applies even if fake security messages appear, which say that the computer is at risk and to download software to protect it. In 99.9% of cases it is a virus.

9) You need to download software to watch the movies
If a streaming movie site requires software to download to access it, it is definitely a pirated virus that earns from advertising scam. Very often, well-concealed advertisements appear on these sites that say they download a program or a plugin to watch the movie. Obviously these are useless and, in many cases, also harmful software.

10) Abuse of the word “free”
Any site that continuously writes the words “gratis” or “free” on its pages is already very suspicious; if it is a site where you can watch films, we are certainly in front of an illegal site.

In conclusion, if we are looking for streaming movies to watch at home on the computer or on TV, even if there is at least one site (the name is super known) that works well and is a little more honest (even if it changes domain every week), it is much more convenient to check on sites like Justwatch to know where films and TV series are broadcast on legal sites and to know which one to subscribe, taking into account that on the best streaming movie sites it is possible to activate free trials, deactivate a subscription with a click to the following month and switch between them without any penalty.
if you want there are also movie rental sites, without subscriptions, where you pay only for a single content, even if they are usually a little expensive.

How to leave a Whatsapp group or deactivate all groups