Home iPhone How to straighten a photo on PC, Mac and smartphone 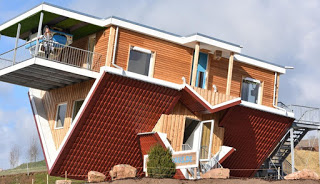 It can happen to find ourselves with photographs, taken with the smartphone or with a camera, in which all the subjects are positioned incorrectly: for example, we may accidentally come across a "upside down" or vertically oriented photo, even if it is shooting was carried out horizontally (with subjects therefore completely upside down).
When we happen to find ourselves with this type of photo, intervening is quite simple and, in most cases, we will not even have to install apps or external programs, since modern operating systems offer various systems to straighten a photo.
So let's see in this guide how to straighten a photo turned upside down or badly oriented by smartphone, tablet and PC, so as to show them with the right orientation.

How to straighten photos on Android

To straighten photos on Android we can use the app Google Photos, present by default on practically every Android smartphone and freely downloadable from the Google Play Store. Since this app is present on all smartphones, we can use it as a basis for straightening photos on every phone with Android operating system.
We open the Photos app on our phone, if necessary log in with the Google account then press on the photo to be straightened, scrolling through the various albums in the app. Once the photo is upside down, we press the icon down Edit (the second from the right), then on the key Straighten photos (with the icon of two arrows that turn one on the other) then we use the button Flip to quickly straighten the photo. 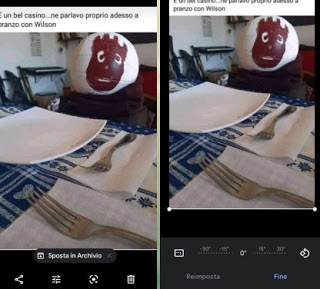 Once the correct orientation has been reached, we press the Finish button to make the changes effective. The photo from now on will appear in the right orientation, even from the cloud or in any other app we decide to share it.

If the photo to be shared is present on WhatsApp and we want to act immediately before sharing, just open the WhatsApp app, press down on the paperclip icon, press on the menu Tunnel, select the photo upside down, press on the icon at the top Edit and then press the button Flip, present below.

Reached the desired orientation, we press down on end and then on the key Share.
Many other social and chat apps have a similar tool (Telegram, Facebook, Instagram etc.): we will only have to call up the quick photo editor and use the button to turn the photo upside down or straighten.

How to straighten photos on iPhone

On the iPhone the operating system is very uniform on all models, so we can follow the procedure to straighten the photos integrated within the app Photo. We open the latter, press on the crooked photo, press at the top right on Edit and finally on the button Straighten below (the last starting from the left). 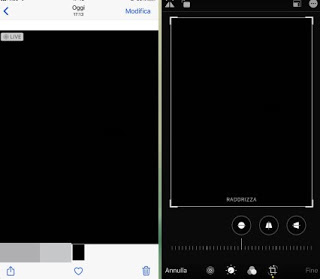 The system will show us various buttons to be able to straighten the photo in a mirror way, acting on both the vertical and horizontal axis; we can also rotate the image freehand, simply by rotating it with two fingers on the screen.
When we are satisfied with the orientation obtained, we press down on end to confirm the changes.

Even on iPhone we can straighten photos using the tool integrated in WhatsApp and other social and chat apps, so that we can intervene just before sharing.

How to straighten photos from PC and Mac

On PC with Windows 10 we can straighten the photo using the app to open the photos integrated in the operating system (also called in this case Photo), so you don't have to install any additional programs for the purpose.
Let's go to the folder containing the photo, double click on it and, in the viewer that will open, press the icon at the top Wheel. 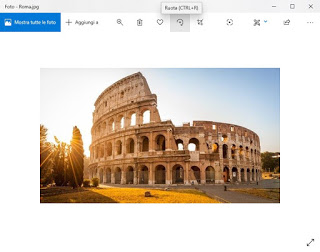 Each click will correspond to a turn clockwise; we press until we reach the desired orientation. The saving of the change is instantaneous, so just close the window to immediately get the photo straightened.

Even on Mac OS X you can straighten photos directly from the integrated viewing app, so you can correct the error even before editing the photo with other programs or sharing it on social media or in some chat.
On Mac we open the Finder and let's go to the folder where the photo is present; alternatively we can also open the app Photo, which synchronizes the shots and images shared with iCloud.
Once we have found the photo to be straightened, we double-click on it and press the icon at the top Rotate left. 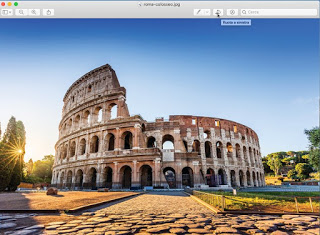 For each click we will have a turn of the photo counterclockwise; keep pressing until the crooked photo reaches the desired orientation, then close the window. The changes are immediately applied to the shot, we will not have to do anything else.

If until a few years ago we had to use a photo editing program to be able to straighten a photo upside down or in the wrong orientation, today just act with two mouse clicks or two taps on the screen in the visualization apps included in the operating system .

How to update an iPhone

How to use the IPCONFIG command to reset the internet