Home iPhone How to turn on Nearby Sharing on Android 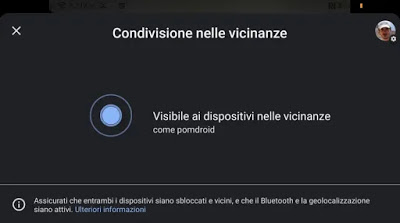 After so many years of delay, Google has finally brought a feature to all Android smartphones similar to Airdrop on iPhone, the one that allows you to share and transfer files from one phone to another. This makes it much easier to transfer data from one Android smartphone to another, without having to set up bluetooth connections or install other applications that have the same purpose.
The feature, which is brought to phones by an automatic Google Play Services update, is called Sharing nearby and is already available for all smartphones (including Xiaomi, Huawei, Samsung Galaxy) with Android 6 (Marshmallow) and later versions. However, it must be activated manually in order to then connect two phones via wifi in order to transfer data to a nearby phone. Furthermore, sharing nearby requires Bluetooth, WiFi and also geo-location services to be active on the phone.

Turn on Nearby Sharing

First of all, to find the Sharing nearby on Android, the easiest way is to pull down the notification bar and press the pencil icon located above the switches, in the top row. In selectors editing mode, i.e. in the quick button selection and placement screen, scroll down to find the share icon nearby.
You can also search Sharing nearby in the Android settings, which should be under services Google, to section Device connections. If it is not yet there, try opening the Play Store and installing updates for all Google apps.
Once the activation screen opens, click on Activate to activate the function.
At this point you can configure how our phone is detected by other smartphones: the first name of the device, theGoogle account to use and then if our phone can always be visible, whether it should remain hidden or only visible to some contacts. You can also change the way the transfer takes place for smaller files by asking to use the data connection.

Use data sharing with other nearby phones

Once the feature is activated, you can press the nearby share button to send files to other nearby phones which also have the feature enabled. The detected phones are listed on the screen with their name and just select it to be able to send a photo, a song, a video or a document.
If no device is found, the other phone may have been configured as hidden in the feature settings. It will therefore be necessary that, on both phones, the visibility to all is set or that the contact of the other Android smartphone is selected.

You can transfer files using nearby sharing even directly from the apps. For example, opening the photo gallery, tap a photo and then press the share button. By scrolling through the various transfer options, you will also find "Sharing nearby". Touch it and then choose which phone to send the open file to. The recipient will be notified and can then accept or reject the file we have sent."
Please note that the file transfer speed is not very high and if it is large files, it will not work without an active wifi connection.

There is, of course, no shortage of alternatives to Google's file sharing and we have seen in another article all the most common ways to transfer files between Android phones (via bluetooth or wifi)

Add bluetooth in the car (and on the car radio)