Home Android How to use ADB Sideload to install ROMs, updates, restore 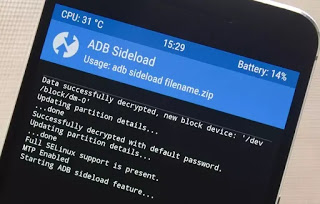 Who has an Android smartphone that is no longer updated for a new version and would like to be renewed and who has an old cell phone that has become slow even after a factory reset and also who has a smartphone that no longer starts or goes in loop in the ignition phase, has the possibility, as already explained, to restore the system, proceed with a manual update of Android or install custom ROMs or Custom.
The installation of new ROMs or a manual Android update is a simpler procedure than you think, it does not require the use of special programs and can be done on any smartphone using the PC connected by a USB cable to the phone.

How to install an Android ROM using ADB Sideload

Normally, when we think about installing a ROM we usually opt for 2 alternatives. Either we use a custom recovery like TWRP or run some quick start commands from the PC. The big difference between one and the other is that in one case we can do everything directly from the phone and in the other, we need a computer. However, there is a third way to install an official or custom ROM on an Android device. It is called ADB Sideload.

The Sideload ADB has several advantages over the previous 2 methods.

Although we will need a PC, it does not require you to enter any series of “delicate” commands.
It is an installation method that does not use the phone’s internal memory.
This can be great for fixing bricked phone cases. Perfect for working in situations where the internal memory of the device is inaccessible and we can only enter our custom recovery.

What exactly is ADB Sideload?

Sideload is a function that is implemented within the ADB command package and is used to transfer files from the PC to the mobile phone. It is mainly used to recover the factory image of a smartphone in an emergency.

Now that we have everything ready, let’s see what a ROM installation would look like. As you can see, it has no mystery and is really practical:

We can also write directly the command “ ADB sideload” Where corresponds to the complete path where the image we are going to flash is located.

Once this is done, TWRP will install the ROM we have indicated from the PC. When the flashing is 100% complete, the phone will reboot and the ROM will be installed.

As you can see, it’s a process that doesn’t have too many complications and works wonderfully when we don’t have a microSD card at hand or we prefer to download ROMs from the computer in a much more convenient way.

This guide then speaks of commands to use to install ROMs, applications, updates, google app packages, and root files of the phone using the command ADB Sideload.
While this guide to ADB Sideload It may seem difficult and technical, I can assure you that if you go beyond the initial impression it is a very simple procedure, which can be performed when you want even more times to try all the ROMs you want without ever having problems.

You can use the ADB Sideload function to install custom ROMs, install Google Apps packages, and also for updates to the current version of Android.
The requirement for installing custom ROMs is that it unlocked the phone bootloader (which is certainly the most difficult part of this whole procedure).

For installing custom ROMs (they say flashing), instead, it is almost always mandatory to have the TWRP recovery console installed.
To install the TWRP console on an Android smartphone you can use the ADB command with Flash boot as described in this guide.

To update or restore Android manually via ADB Sideload, instead, it is not necessary to unlock the bootloader (the Android version must be the official one for that phone to download on the manufacturer’s website).
The Update with Update from ADB can be done in any recovery console, including Stock Recovery, CWM Recovery, and TWRP Recovery.
Restoring via Android’s ADB system can be useful in many situations if Android is unable to boot or if it remains blocked (Bricked).

What are ADB (Android Debug Bridge) and ADB Sideload?

We have already talked about how to download ADB and Fastboot, two command-line tools provided by Google itself.
Android Debug Bridge (ADB) allows the computer to communicate with an Android device and launch commands on the system such as transferring a file.

ADB Sideload is the command that allows you to transfer the Android system installation file (it is always a .zip file) and install it directly on the phone, from the PC.

Before going ahead it is necessary that:

Of course, you will also need to download the ZIP file of the Android system to be installed.

You can download the official Android system for your smartphone from sites like Samsung Updates, Firmwarefile or other official sites.

If you want to download a custom ROM, the ideal is to look for it on the site XDA Developers which has a forum for each smartphone with related links to download the ROMs to try.

Then connected the Android device on Windows PC (this guide uses ADB Sideload on Windows), make sure that USB debugging is enabled and put the ZIP file in the same folder where the file is adb.exe.
Inside the folder with ADB, right-click on the blank with the Shift key pressed to open a new window on the keyboard command prompt (if you open Powershell in Windows 10, each command must be written with ./ for example ./adb).

and then
ADB devices

To make sure that Android is correctly recognized.

To restart the phone in recovery mode.

3A) Now if you are installing an official Android update or the same Android system to do a restore and it has not been unlocked the bootloader will find the default recovery stock of Android, simple and very limited.
In this case, choose the option Apply Update From ADB

Replace the name file.zip with the downloaded one, follow the file transfer and installation and restart the device.

3B) If you are installing a custom ROM, it is important to have the TWRP recovery console installed.
To install TWRP (which can be downloaded from the official TWRP website) we have linked above the guide to do it which simply requires you to download it to your PC, restart the phone in bootloader mode and install it using the Fastboot command.
In summary, the commands are:
adb reboot bootloader

and then
fastboot flash recovery twrp-2.8.x.x-xxx.img

With the TWRP installed, repeat step 2 to enter recovery with the command
ADB reboot recovery

Then in TWRP tap the button Advanced -> ADB Sideload, mark the options wipe Dalvik cache is wiped cache swipe the slider to activate it.

Once in Sideload mode, launch the command from the PC
adb sideload file.zip

The zip file will be moved and written on the Android phone automatically and simply.

This method can be repeated, on TWRP phones, as often as you wish, to try the ROMs until you find the one you prefer.
Obviously I have to decline any responsibility for any problems that may occur and can cause situations that are difficult to restore.
The Forum XDA Developer site remains to be consulted before any installation of ROMs or updates.
For a better understanding of the guide, I also leave this video which, although old, is really well done and explanatory


READ ALSO: How to do Android Root to unlock the phone