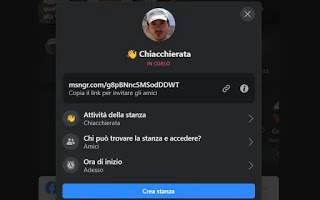 Facebook has recently launched a new group video chat feature called Messenger Rooms, which expands the group chat features already included in Messenger and allows you to create one videochat room with Facebook friends, up to 50 people all together (with grid view as on Zoom) without time limits.
Messenger Rooms would like to offer itself a bit as an alternative to Zoom or Google Meet, with the difference of not being oriented towards video meetings at school or for companies, but rather to be in contact with friends or family, permanently.
When it comes to chat rooms, you can imagine a bit as if you were inviting people to your home, sending invitations and deciding who can enter and who cannot. the door is always open for guests, at least until the creator of the virtual room decides to close it. It is a slightly different video chat system than normal video calling, which starts and ends when you hang up. In this case the room can remain open even if the creator leaves, without time limits, letting that people can come and go whenever they want. In the Chat Room people can continue to interact, see each other and chat even if the creator is not online, provided that the creator has not deactivated it.Messenger Rooms is a very ambitious and powerful Facebook feature, so much so that you can use it not just from the Messenger application, but also from the home of the Facebook site (from PC) and from the normal Facebook app for Android and iPhone.

Create a Messenger Rooms from a Facebook site or app

To start a Messenger Rooms from website or Facebook app all you have to do is press the button Chat (on the app it’s called Room of …). In the main Facebook screen you can see, at the top just below the box “Create a post“and above the Stories, the list of rooms opened by friends and the button to create your own private room.
When creating the room you can see a invitation link, which can be shared with the people you want to chat.
It can also be defined the activity of the room, which can be a chat, an aperitif, a birthday, a meeting or something else (there are many selectable options).
Who can access the room allows you to choose if Friends can see our Room created in their Facebook app and therefore access directly even without receiving the invitation link or whether to keep it private and hidden and invite friends selected individually.
Be careful, in this configuration screen, because there is the option that allows to anyone with the invitation link to access the Messenger Chat Room. If the “Allow sharing of the invitation link“is left active, friends can in turn invite other people to our room and anyone with the link can access it. Not only that, it is also possible to enter a videochat Rooms without having to be friends with the creator of the room and without a Facebook account , by logging in as a guest. Basically everyone can access a Facebook Room even without connecting to their account and appearing with any name.
At the end you can read a summary and start the room, leaving it open as much as you want. While waiting for other people to enter, you can also leave the room and wait for the notification from Facebook when someone logs in.
To protect the room and to prevent anyone with the link from being able to access freely, you can press the button to see the participants and use the padlock that blocks access.
To end the room permanently, you have to press on the box of your room from the main Facebook screen and then, on End Room. Beware that if you close the window of the created room and do not use the button Ends, the video room still remains active and people can still access it and video chat.

Create a Messenger Rooms from Messenger site or app 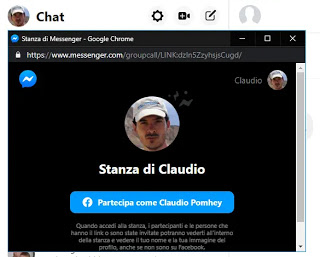 You can also create a Messenger Rooms from the Messenger app on Android and iOS, from the www.messenger.com site or even from the Facebook site, by pressing the message icon at the top right.
In this case the creation process is a bit different: you have to press the button at the top of the camera with the + on it, which is located next to the word Chat, near that of the camera or pencil (on the app).
By opening a video chat room on Messenger, you enter immediately without any preliminary configuration screen. This lack can be explained by the fact that on Messenger it is possible to start a Facebook group video call without needing to use the Rooms function (but it is something that can be deceiving).
After logging in, you can press the bottom button of the participants to see the link to share to invite other people to join the videoroom. Always from the participants box it is possible to end the call and then close the room to everyone or block it, so as to no longer allow anyone to access.
By creating a video room in Messenger, all friends will be able to access it and even unknown people or without accounts, if they have the link to the room, they can enter freely. By blocking the room no one can enter it.
For the moment, the Messenger Room started by Facebook and the one started by Messenger therefore seem to have different behaviors and options which, I imagine, will be standardized soon to make the functionality of the group video chat more homogeneous (at the moment it seems rather difficult to control).

Differences between Messenger Rooms on Smartphone and on PC

As with normal Messenger video calls, there are some differences when accessing the site from a PC and when using the app on Android or iPhone or iPad.
The Messenger Rooms videochat on PC allows you to share the screen. On Chrome you can share the entire desktop, a window of an open program or even a Chrome tab. from smartphone this cannot be done.
Conversely, the Messenger Rooms from smartphone allows you to use special effects and games with the participants in the videochat. Just touch the icon of the little man who laughs over his image to open the list of effects and that of the activities, which are nice games to play during the video call.
From PC, you can press the gear button to configure the webcam, microphone and speakers. You can still use special effects even using the video call Facebook on PC, if you install the SnapCam program with many AR effects and fun transformations as explained in another article.
Keep in mind that on smartphone the video call of Messenger Rooms only works if the Messenger app is installed. Also pay attention to the fact that you can only participate in one videochat at a time on Facebook, therefore if you create your own room and leave it active, you cannot also enter other people’s room and vice versa, if you enter a room , you must first finish your room.

Facebook plans to add ways to create rooms from Instagram Direct, WhatsApp and Facebook Portal as well.
The problem with these Facebook Rooms is that they are quite confusing at the moment: The feature was announced by Facebook as “social platform focused on privacy“and it really sounds like an absurd statement. On the surface, Messenger Rooms looks very similar to its competitor Zoom; the service allows anyone with a Facebook account to create a so-called room that others can join, having up to 50 simultaneous participants and views. squared.
First of all, if you don’t configure the room well, you can end up with meeting with strangers too easily, especially if the Room is started from Messenger where the option to invite selected people does not appear.
Another problem is that Rooms has no End to End encryption. Facebook Rooms is based on Messenger, so it uses the same technology to encrypt an audio and video conversation between people. Since the calls are not end-to-end encrypted on Messenger and because the calls pass through the Facebook servers, the company has the technical ability to access all the conversations and, if desired, also deliver them to the police if they are detected wrongdoing.
Furthermore, even if Facebook promises not to watch the contents of calls and video calls, Rooms is also used for the collection of user data for advertising purposes.
Finally, it is true that rooms can be locked or unlocked and if a room is locked, no one else can participate, but it is also true that a room cannot be password protected, which would have been better. At present, we must first wait for the invited people to enter and then remember to lock the room (and if we forget, anyone can enter).
It should also be noted that Facebook Messenger Rooms is quite similar to Facebook live broadcasts, with the difference that in the Rooms everyone can be seen and chatted, while in Live only one person speaks live.