Home Windows 10 How to use the new Windows Explorer 10 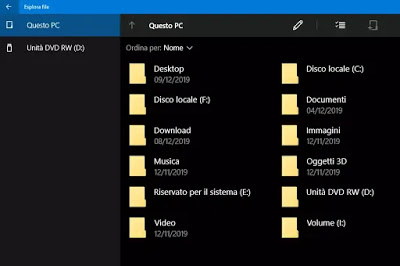 Explorer is the most important and fundamental function of Windows, which basically allows you to open folders in windows, search for files, organize them, move them, delete them and so on. Windows folders have always remained the same since Windows 95, with some improvements especially in Windows 10 where the menu of options at the top, made with large buttons, allows you to perform various types of operations in a simple and intuitive way. Moreover, in the latest versions of Windows 10 it was also added the possibility to set the dark background instead of white in the Settings> Personalization> Colors.
It is not known whether in Microsoft’s projects there is that of giving a new look to folders when they are opened in windows, but a little trick lets you try what could be the new Windows 10 Explorer interface in the future if Microsoft decides to make this tool a Windows app too.Discover the new and hidden Windows Explorer 10 it is very easy and it is also possible to use it instead of the traditional one if you prefer. The only requirement is that Windows 10 is updated to the latest version, otherwise, it will not work.

To bring up the new Windows Explorer, the trick is just that open a folder any and then, in the address bar at the top, copy and paste the following path:

shell: AppsFolder c5e2524a-ea46-4f67-841f-6a9465d9d515_cw5n1h2txyewy! App
This will open the This PC in the new graphical version of Windows 10, with the folders displayed in an application.
To use it quickly, you can right-click on the icon of the new resource explorer on the taskbar and then select “Add to the taskbar“.
To quickly open the app of the new Windows 10 file and folder explorer you can also press the Windows-R keys together to bring up the box. Run and then paste the path seen above and press Enter.

In the new File Explorer interface on Windows 10, you can use the top keys to open the various folders, copy paste and move files, create a new folder, search for a file and change the way icons are displayed. There are not all the default folder viewer options in Windows 10 and the disks will be displayed in This PC as normal folders, so not easy to distinguish. In addition to this, it is a very fast interface to use, very well defined and potentially more convenient to use, if improved in the future.

READ ALSO: Tricks for File Explorer in Windows 10 and folder options to change