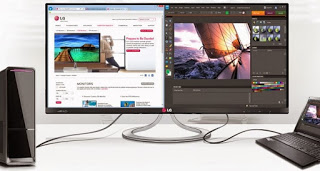 If we work a lot with computers, carry out repairs, have a computer shop, or write themed articles on our personal blog, it can happen that we have two desktop computers and a single monitor to use for both. In this scenario, it is not recommended to use a single HDMI cable and move it from one computer to another as needed, as the HDMI port is not always easily accessible, as well as making it very frustrating to use both computers at the same time. As good IT experts we can bet on a good one HDMI signal doubler or HDMI Switch, able to manage two separate audio/video streams and make them reach the only monitor at our disposal, manually choosing which computer to give priority to the screen based on what we have to do at that precise moment.

In this guide, we will show you how to prepare two computers to share a single monitor, carefully choosing the 3 HDMI cables to use and which switch to use among the models available on Amazon. In a dedicated chapter, we will also see how to use USB switches, so as to be able to divert our input devices (keyboard and mouse) from one computer to another in a simple way.

How to use two PCs with one monitor

In order to create this shared environment, we will obviously have to have a single monitor, two fixed PCs or two computers of any kind (even a PC and a notebook or a PC and a Mac Mini), three HDMI cables of the right length and an HDMI switch capable to manage two separate HDMI streams and to generate a single output, the one that will reach the HDMI port of the monitor. If we have not yet purchased a new computer, we suggest you read all the tips and tricks in our guide Things to know before buying a new computer.

If we want to place the switch on the desk, the two cables for PC 1 and PC 2 must be long enough (at least 1.8 meters), so as to also cover the distance between two traditional fixed PCs. Below is a list of HDMI cables suitable for the purpose.

To connect the switch to the monitor we can use a smaller cable (1 meter or less), so as to occupy the least possible space on the desk, placing the switch also directly under the monitor (or on its base). Below we can find a series of shortened HDMI cables.

Obviously, we have complete freedom of configuration: we can choose three long cables, two short cables and one long or even three short cables, depending on the position and size of the computers to be connected. The only important thing is to get three good quality HDMI cables before continuing with the rest of the guide. If we do not know the acronyms that accompany an HDMI cable, we recommend that you read our in-depth analysis How to choose the right HDMI cable.

After having seen the HDMI cables to use, we come to the device that allows you to change the video source between two computers at the push of a simple button: HDMI switch. 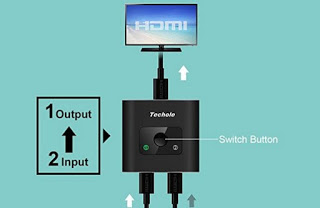 This little device allows you to connect two HDMI cables as input and provide a single HDMI signal in output (output), which will be sent to the monitor. To switch from one PC to another, all we have to do is press it Switch Button present in the upper part (often accompanied by two bright LEDs to quickly identify the active source), so as to switch between the two connected PCs and display only the video of the desired computer on the monitor. Below we have collected the best HDMI switches that you can buy on Amazon at a really competitive price.

When we buy one of these devices let’s make sure they look like bidirectional HDMI switches or that support the “2 input-1 output“, otherwise we run the risk of buying a similar but profoundly different device like theHDMI Splitter, which allows you to connect two monitors to a single PC (scenario very different from the one on which we based the entire guide).

Now that we have everything we need to be able to connect our two computers to the single monitor we can proceed with the final configuration: connect the HDMI cables to the splitter, monitor, and computers, turn on the monitor and turn on one of the two computers (or both) : the HDMI switch will turn on by itself using the current of the HDMI cables and, by pressing the button on it, we can choose whether view the video of PC 1 or PC 2; to make everything even more integrated we can also follow the steps in our guide Same mouse and keyboard to control two or more computers, so you can share a mouse and a keyboard between the two computers (we will in fact have two switches, one HDMI and one USB). The HDMI switch can also be used to connect two consoles to a TV that has only one HDMI port, so you can take advantage of both without having to change TV (a much more expensive expense).

If we want to use two monitors side by side on the same computer, using the HDMI ports of a dedicated video card, we recommend that you read our guides How to connect two monitors to the PC is Dual display settings in Windows 10 for working with two monitors.

If the monitor in our possession does not have an HDMI port, it is time to change it with a more recent one, choosing from the models seen in our guides Best PC monitors to buy between 100 and 200 Euros is Buy 21: 9 wide monitor (ultra widescreen).