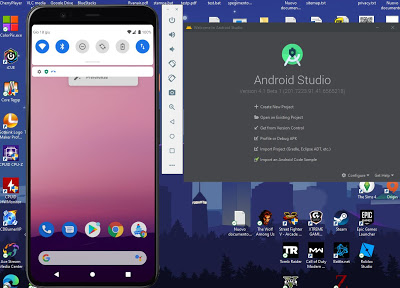 This week, Google released the first public beta of Android 11, L'latest version of Android coming out in 2020. At the moment Android 11 can only be installed on Google Pixel smartphones (from Pixel 2 onwards) and before seeing it as an update on other smartphones months will pass. Who is curious, who wants to try new features and even those who simply want to be able to install Android on their PC (as if it were a normal program), then they can download and install Android 11 on Windows 10 using the official emulator Google Android Studio.

If we don't have a Google Pixel smartphone, we can try Android 11 directly on your PC by downloading it into the official Android Studio emulator, simple and free. You can then start an Android smartphone on the computer screen and use it with mouse and keyboard in all its functions, without any limitation (you can also install other apps through the Google Play store).

As we all know by now, there are several Android emulators for PC and while some are optimized for games, none of them support the latest version of Android yet. If you want install an emulator with Android 11, need of course use Android Studio.

To install Android Studio, you must first download the installer (.exe file) from this page (choose the latest version released). Once the program is installed, follow the wizard for the first configuration which will require permission to install some system components. The important thing during installation is that, when the component selection screen appears, both are selected Android Studio, be Android Virtual Device. For the rest, you can go ahead without changing anything (you can still change the installation path).

When the installation is complete, press the button Finish and start Android Studio on Windows 10 as if it were a normal program. In Android Studio, choose not to import the default settings and then not to send (or send) usage statistics. In the screen that asks you to indicate the type of installation, choose the option Standard, while as a user interface you can choose the light scheme or the dark mode.

When finally all the initial configurations have been completed and the welcome window appears in Android Studio with the buttons to create a new project or open an existing one, you must press, at the bottom right, where it is written Configure and then on AVD Manager.

When you open the manager of "Android Virtual Device", press down on"Create Virtual Device". You will then be able to select a phone or tablet to install and the best choice at the moment is to download the Pixel 4, that also includes the Google Play store. Then select Pixel 4 and then press on Next. When choosing the system to download, select the first one (marked with letter R) and then press again Next. On the next screen, you can change the name of the virtual Android device and change some settings such as the amount of dedicated memory and the graphics performance. You can leave everything as it is and press on Finish to start the download.

After the download finishes and the virtual machine is ready, you can start Android on Windows by pressing, from the list of AVD Manager, on the Play button located on the right side of the description line.

Android will start in a window that has the same shape as a Pixel 4 smartphone and can be used completely, installing applications, changing settings and trying all the functions. To put the Italian language, simply open the system settings. On the right side of the virtual smartphone it is possible to press what should be the keys of the phone: volume up and down, key on and off, keys to take photos, to zoom, to go back and go to Home. You can also press the button with three dots to enter the configuration of the Android virtual device.

How to update a Mac