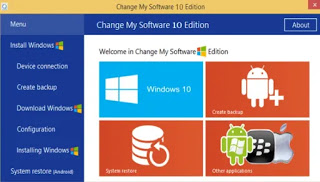 If we have a tablet, but we are not satisfied with its capabilities and would like to change its operating system, it is possible to do so and then switch from Windows 10 to Android or, vice versa, from Android to Windows 10.
In the first case you get access to the thousands of Google Play Store applications, in the other case instead, if you install Windows 10 on an Android tablet, you can then use programs such as Word and Excel in the original version and maybe take advantage of the tablet like a PC, by connecting a keyboard and mouse to it.
In this article, divided into two parts, we therefore see both how to install Windows 10 on any Android tablet, be how to install Android on a Windows 10 tablet PC, showing any limitations, requirements and benefits for each of the solutions.
Before starting, it is important to know that the change of operating system on a portable device such as the tablet, although technically very simple, is always a delicate process that can lead to the tablet not working anymore. In addition, it is a process that can void the device warranty and has no official support. It should also be considered that while Android is always free and can be installed anywhere without problems, Windows 10 is instead a paid operating system that requires the purchase of a license (although it is possible to use Windows 10 without a license, with some limitations). We must therefore consider this guide as an experiment that it would be better not to try on a brand new tablet or that we use every day.

How to install Windows on an Android tablet

If we have an Android tablet that we use little or almost never, it can be interesting to try it install Windows 7 or Windows 10 on it and turn it into a small touchscreen PC (maybe to which also connect the keyboard).
By avoiding complicated procedures, the easiest way is the one offered by the program Change My Software, no longer updated since 2017, but available in different versions for Windows 10, Windows 7 and also Windows 8 and XP.
The program requires that the Android tablet is connected to the PC via USB cable and that the Android tablet has at least 8 GB of free space. The procedure is quite simple:

During the final phase of the installation, do not check the box that removes Android otherwise you will not be able to go back and if the performance were poor or there were problems, it will be much more difficult to restore Android.

While installing Android can be an interesting solution, probably, in the case of an old and / or slow tablet, it would be better, instead of putting Windows, change ROM and install a lighter Android version. In another article we saw the guide on how to install a Custom Android ROM and how to install ROM with ADB.

How to install Android on Windows tablets

If we have a cheaper Windows 10 (or Windows 8) tablet, which works badly because it is slow and because it has little space in the internal memory to install programs, it is really worth trying to install Android on it to bring it back fast. Android consumes less resources than Windows 10, it is free and allows you to install many more applications. From the procedure point of view, the installation of Android on a Windows tablet, theoretically more complicated, is facilitated by some operating systems born precisely for this purpose.
In particular, it is possible to install Phoenix OS, the Android operating system for PC, which works with all Intel x86 devices and can be installed by creating a USB stick.
The procedure for install Android with Phoenix OS on a Windows 10 tablet is to use the downloaded installer to create the installation USB stick and then, boot the PC from USB and follow the guided procedure.
Just be careful to disable any secure boot option in the tablet UEFI BIOS. In addition, an external USB keyboard must be connected to the tablet to select the various options during installation.

If you don’t want to change the operating system, you can use simpler ways to run Android apps on Windows 10. Just install one of the Android emulators for Windows, which work like normal programs and allow you to download smartphone apps and games.
As seen in another guide, it is also possible install Android on PC on virtual machine, taking advantage of the Android-X86 project.

Other ways to revitalize an old or slow Windows tablet is that of install Chrome OS with Cloud Ready, which supports touchscreen controls and also allows you to use Android applications.

Recover photos and videos received in Whatsapp, if deleted

Best apps to read Manga (and download) on PC, Android and iPhone