Home iPhone iOS 13: new features and improvements of the next update on the... 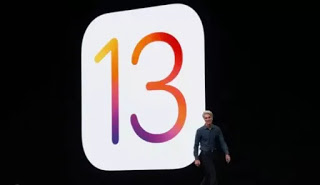 Apple announced the next iPhone system update, iOS 13. The first big news is the fact that iOS 13 will not be available for iPad: Apple’s tablet, in fact, will soon have its own operating system with separate features, which is called iPadOS (which will be an update of the iPad starting from the Air 2 version).
iOS 13therefore it will be available only for iPhone and iPod Touch and, regarding the smartphones released on the market up to this moment, it will be possible to install the next update of iOS on iPhone XR, iPhone XS, iPhone XS Max, iPhone X, iPhone 8/8 Plus, iPhone 7/7 Plus, iPhone 6s / 6s Plus, iPhone SE and then also on the 7th generation iPod touch. As you can see, this time I excluded the now historic iPhone 5S and then also the most unfortunate iPhone 6 and 6 Plus, whose support will, therefore, be terminated this year (although they can still be used without problems). Same fate for the first-generation iPad Air and the iPad Mini.
Below, we see improvements and new features of iOS 13 on the iPhone, as announced by Apple and already available in the beta version of iOS 13.1) Performance improvements
Apple says that iOS 13 will bring a noticeable improvement in the performance of iPhones, even older ones (which is important to know since Apple has been caught in the past to slow the performance of less-current iPhone models after an iOS update).
iOS 13 also promises to make unlocking with the framing of visas 30% faster than iOS 12 and apps will also be launched twice as fast.

2) Less space occupied by the apps

One of the main problems of the iPhone has always been the internal memory space, often limited in the cheaper versions. Now Apple has decided to make the apps smaller, with a 50% decrease in downloads and 60% of app updates.

Dark mode or Dark Mode is perhaps the most obvious novelty of iOS 13, which allows you to use black backgrounds in application screens (such as Apple Maps, Music and Notes), on the keyboard, notifications and settings menus.

The typing scrolling is the one that allows you to write on the touchscreen keyboard without ever taking your finger off the screen. On Android, this is an optional writing mode that has been around for a long time, while on the iPhone it was not yet available until today.

The Apple Reminders app is redesigned and improved with a series of filters to find “Scheduled”, “Complete”, “Today” and “Everything” activities.

6) Updates to other apps pre-installed on iPhone

Last year, Apple updated the Apple Books, Stocks, and Apple News, while this year the Mail, Notes and Safari apps are improved and updated. Among the most relevant functions we find that the Mail app now has new formatting and fonts, the Note app supports shared folders while on Safari Apple has added custom preferences for each individual website.

The Apple Maps app has never been appreciated even by the most ardent fans, who have not really had convincing arguments to say that it was better than Google Maps. With iOS 13, therefore, Apple will try again with a new Apple Maps to which are added visual improvements and a feature similar to Google Street View called Look Around.

To improve privacy protection, Apple has launched a new feature called “Log in with Apple“which will allow users to access websites via Apple accounts, without disclosing any personal information and without having to create new accounts (practically very similar to the button Log in with Facebook or Log in with Google present in many sites and apps). The Login with Apple feature is not exclusive to the iPhone, but it can also be used by any other PC or phone.

At Apple, they are very keen on photography and don’t want users to use apps other than their own to take pictures and edit them. As a result, even to counter Google Photo competition, new photo and video editing tools have been added within the Default Photos app so you can adjust lights, shadows, saturation, white balance, contrast, vignetting and brightness. You can also rotate videos directly in the Photos app (finally). The Photos app also improves in photo management, with the ability to hide duplicates and similar photos automatically and tidy up the gallery highlighting the most important events.

Unbelievable but true, we had to wait for 13 versions of iOS and a new operating system for iPad to finally get that by connecting a USB key to the iPhone and the iPad, we could browse the files inside. Both iOS 13 and the new iPadOS can read USB storage devices including flash drives, SD cards, and even SSDs and hard drives. The data can be accessed via the File app. Furthermore, it is now possible to directly connect a camera or video camera to transfer photos and videos to the iPad.

How to Disable Windows Defender Antivirus in Windows 10

How to watch Amazon Prime Video for free