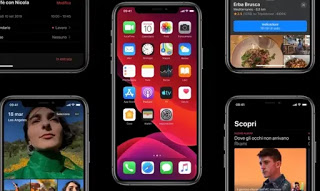 Every year when it comes out a new version of iOS and after installing the update, each iPhone user (at least those most geeks), spends the first minutes touching frantically between the apps looking for the news in the settings menu, looking for great features and maybe even those little hidden changes to which most people do not notice. iOS 13 has a mix of all things, with new features that significantly change the apps used every day, a new Photos app and then with more subtle, equally important changes.
The updated iOS 13, available from today, can be downloaded on the iPhone directly from the menu Settings and can be installed on iPhone 11, iPhone XS, iPhone XR, iPhone X, iPhone 8, iPhone 7, iPhone 6S, iPhone SE and also for the seventh-generation iPod Touch. The iPhone 5S (sin) and iPhone 6 will no longer be updated.
As for the iPad, instead, Apple has released a new operating system as an update to iOS 12, calling it iPadOS.
In this article, we see of the list all the changes and new features that iOS 13 brings to the iPhone.READ ALSO: Options on iOS to change or disable (iPhone and iPad)

The most important novelty of this new version of iOS and the most publicized one is certainly the Dark mode. The dark mode setting converts all apps and iPhone screens to a dark gray background, which makes the screen easier to read at night and less annoying to the eyes. When a dark mode is enabled, Apple apps, such as Maps, Messages, and Mail, switch to a darker color scheme with a black background, the backlight dims and the translucent background behind notifications and app folders change color. The dark mode
You can use the dark mode so that it is activated automatically at a specific time, or you can activate and deactivate it manually from the control center or settings or even with a voice request to Siri.
The dark mode is also a way to save battery power and make it last longer if you have an iPhone with an OLED screen like the iPhone X or XS.

With almost a decade of delay compared to Android, it is now possible to write on the iPhone keyboard sliding your finger over the letters instead of touching them individually, which is very useful when writing a message with one hand.
Text selection has also become easier when using your finger, you can select a word with a double-tap, select a phrase with a triple touch and a paragraph with 4 touches.

Find my iPhone with Find friends

Apple’s new “Find …” app combines “Find my friends” is “Find my iPhone” in a single interface. The application also makes it easier to identify lost devices because, in addition to searching via wifi, it uses Bluetooth from any other device with iOS 13 nearby to help track the location of the lost one. more and more people are upgrading to iOS 13, the signal of each device will help strengthen the network for everyone (using Bluetooth), so the device will also work to find the iPhone not connected to the internet.
OS 13 also renews the functionality of localization services by preventing the apps from immediately accessing automatic location monitoring after installation. The request to authorize the location for an app will always be displayed. The option “Allow during the use of the app” is used to grant access to the location only during the use of the app.

iOS 13 brings a great update to the Photos app: photos are now organized in years, months and days and there is also a view of “all photos”. The change can be a bit confusing at first, but it certainly makes the app more intuitive as it is used. In the “months” and “days” view, the photos are grouped in chronological order and in events, to make it easy to search for photos taken during trips and parties. In the folder that shows everything else, there are then acquired screenshots, photos of documents, duplicates and screen recordings.
The new Photos app greatly simplifies photo editing, with editing controls easier to find and use. iOS 13 also adds some new editing tools to adjust the vibration, white balance, sharpness, definition, noise reduction, and vignette and to set the intensity for the filters.
The tools of video editing can adjust color correction, rotate recorded movies, crop them, change perspective and various other things, eliminating the need to download other apps.
There is also a new style of mode Black and white portrait and an improvement in the separation of the smaller foreground details from the background.

Using Safari to open websites, when you find a download link you can download the file. From the Download button, you can check and open all the downloaded files. By default, the downloaded files will be in the iCloud Drive Downloads folder. You can save them in the iPhone’s local memory by going to Settings> Safari> Download and selecting “On my iPhone“.
Safari now also allows you to share entire Web pages like PDF or Web archives.
Another feature of Safari in iOS 13 is the one that allows you to long-press the scroll bar to scroll quickly through the Web page.
By holding down a link or a photo on an internet site, you can then see a preview of the linked web page, open it in a new tab or a new window, copy and share the link or image.
In Safari you can automatically close inactive tabs by choosing, in Settings, whether to close them after a day, after a week or after a month.

The Maps app improves significantly in iOS 13 thanks to the integration of the “Look Around” photo mapping service similar to Google Maps with Street View. When available, you can touch the binoculars icon to enter the immersive mode. The Maps app now has a section Favorites where you can save a place to find it quickly. You can also use the Collections function to select places to visit.

The Reminder app in iOS 13 is completely renewed with grouped lists, each of which can contain activities and secondary activities with attachments. One of the best features of the new Reminder app are the suggested dates for activities, so you can create reminders faster.

Other features and modifications of iOS 13

READ ALSO: Speed ​​up the iPhone and optimize iOS

Use a VPN on FireTV Stick, Chromecast, TV Box and Smart TV

How to Add Music to your Facebook profile and Stories

If Windows 10 doesn’t start, how to save everything and reinstall