Which sites today allow you to listen to music online, even for free or with unlimited subscriptions from PC, web and mobile 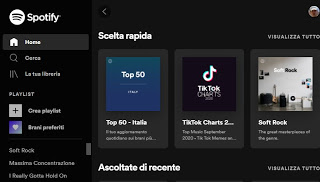 As already done for streaming movie sites, we see here which are the best sites to listen to streaming music, focusing on those that can also be used for free and not necessarily with a subscription.
The music industry had to run for cover after Napster, which shut down virtually every record store in the world, and after the rampant piracy of sites that, without having the rights, let you listen to music for free (like Grooveshark). A bit like online movies, sites and applications have also become very convenient for music to stream your favorite songs, with subscription or with automatic playlists interrupted from time to time by commercials.
In fact, the business model of the legal music sites has become a bit like radio, with free listening, except if you want to be able to choose exactly which songs to listen to. Below, we see the strengths and weaknesses of best sites to listen to free music streaming online, which can also be used for free.

READ ALSO: Best programs to listen to music on your PC

1) Spotify it can be considered the Netflix of music and is definitely the number one streaming music site in the world, running pretty much everywhere, with all the music you could ask for. You can listen to all PC music from Spotify for free, create playlists and use a PC music client that allows you to save your favorite songs (not download). You can also use Spotify for free from your smartphone, albeit with more limitations (the app does not allow you to search for songs, but only to listen to playlists). The app also integrates with Alexa, Google Maps and Google Auto.
The Spotify premium subscription costs 10 Euros per month and allows you to search and listen to each song without restrictions and without advertising and also allows you to download songs to listen to them offline. The subscription is particularly advantageous if you use Spotify from a smartphone, while from a PC the free version is more than enough to search for titles and listen to music (on the open.spotify.com site and log in with a Facebook account).

READ ALSO: Web player for Spotify, to find playlists of songs to listen to online.

2) Youtube Music is the special section of Youtube open since 2018 that allows you to listen to playlists and search for all the songs, with an interface different from the normal Youtube site, optimized for music. The free version, without subscriptions, has some flaws in advertising and, above all, the fact that it is not possible to close the app (on smartphone) while listening. But the site is really advantageous when used on a PC, with the ability to choose to listen to any song by searching for the title and create playlists without imitations. It is also possible to upload your own music from your PC to Youtube Music so that you can listen to them from anywhere, without having to copy mp3 files to USB sticks or mobile phones.

3) Idagio it is perhaps the best site to listen to playlists of classical music, with a lot of variety depending on the mood or genre you want to listen to. Idagio is perfect for classical music lovers, with a complete and free catalog, and ready-made playlists to choose from.

4) Pandora Radio it has always been one of the most popular music sites in the US, which is not yet officially accessible from Italy, but which works with a certain type of connection (just change the DNS on the connection and set the Google DNS). It is a site with listening to playlists automatically generated and supported by advertising. Basically, you write the name of a singer and then listen to the continuous and uninterrupted playlist of songs selected automatically based on the preferences and votes that are given to each song.
To enjoy the functions of Pandora it is definitely worth creating a free account (put as ZIPcode something like 20100) so that you can then store the ratings given to the various songs and customize the playlists that are automatically generated. It is possible to listen to Pandora practically anywhere, except that the apps for Android and iPhone are still not available in Italy.

5) Jango is a lesser known site, similar to Pandora but easily accessible from Italy, which uses a proprietary algorithm to personalize the musical experience. Jango limits your ads to just one per day if you log in with a Facebook account, it allows you to skip songs you don't like without any problems and has great quality. You cannot choose the song to listen to by looking for it by the title and it has a less clean site than the competition.

6) LiveXVlive it is perhaps the best site to listen to and watch live concerts online or even recorded. The site has a premium plan, but also the possibility of being able to see the concerts for free without restrictions. 7) Amazon Prime Music has added a free version to its service, with playlists automatically generated according to genre and mood. Who then has an Amazon Prime subscription, can also choose what to listen to, with some limitations in the catalog, but with unlimited jumps and without advertising. 8) TuneIn is the best site / app to listen to internet radio from a PC or mobile phone, where you can find Italian FM radio stations online, also divided by genre, artist or song. The smartphone app is especially good for listening to streaming radios for free.

9) Soundcloud is an online music site curated by users who upload songs made by them, covers and remixes that everyone can listen to for free. You can search by artist and group name, famous song titles, podcasts, search for songs by genre, look at the charts. SoundCloud also has apps for Android and iPhone.

10) Deezer is the real competitor of Spotify, which today offers a practically identical music listening service, free but only from a website, supported by advertising in the Free version. The only reason Deezer is less famous than Spotify is that while the latter initially came out with a very free free service, Deezer has always been, right from the start, a subscription service thus losing the initial advantage.

11) Last.fm is an ancient site, which has undergone several restylings and is now another resource for listening to free music. Even if the streaming uses Youtube, Last.FM creates automatic playlists based on what you listen to within the app on all devices or computers.

READ ALSO: Sites with songs and free and free music for clubs and parties

Finally, remember that streaming music can now be heard from any stereo, if it is connected to the internet through devices such as the Amazon Echo Flex.
On the other hand, you can listen to streaming music on every car stereo, even of the old type (not Android Auto or Apple CarPlay) by connecting it to the smartphone via audio cable or bluetooth (or even using Echo Auto to have Alexa in the car)

Find address and name from the phone number

The best templates to download a ready-made Christmas card

How to activate God Mode on Windows 10

Best app to generate OTP, for secure access to sites

How to install and activate Linux in Windows 10