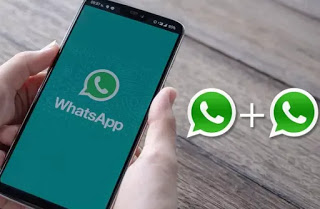 More than 10 years have passed since WhatsApp was launched and even though it has become the most widely used messaging app in the world, it still has so many limitations that, honestly, are incomprehensible (especially compared to similar apps like Telegram. evolved). Among these limitations, we cannot forget the lack of an internal cloud that allows recovering photos even if they are deleted from the phone (something that Telegram and even Facebook Messenger do) and then the possibility of being able to access the same Whatsapp account from multiple devices, smartphones, and PC, completely. It is not possible, therefore, to access the same Whatsapp account simultaneously from two smartphones without one of the two apps being disconnected.
On this, at the moment, it does not compromise and WhatsApp does not provide any multi-device support for access with the same account, because the operation of Whatsapp is to link each account to a single phone number and it is therefore impossible to access to another account with a smartphone that has a different phone number (and it is also impossible to access Whatsapp on a smartphone without a SIM card).
There are however two ways to overcome this limitation e-access Whatsapp simultaneously from two different smartphones or tablets, although it requires that both be turned on and connected to the internet.

Thanks to the possibility of being able to open Whatsapp via a website from your PC, it’s possible to access your account from any other device, not only, therefore, a PC, but also from another smartphone or tablet, both iPhone and Android.
The operation of Whatsapp web requires access to the site https://web.whatsapp.com/ from the second device. Since, in theory, this site could not be accessed from a smartphone or tablet, the trick is that of open the web.whatsapp.com address in desktop mode. If using Chrome, once the page is open, press the menu button with three dots and then scroll down the options to activate the desktop mode.
From the smartphone where the Whatsapp app is installed, open the main menu to find the Whatsapp Web option that will open the camera with a QR code scanner. You can then scan the QR code that appears on the Whatsapp Web site page and access from the browser of the other smartphone. Whatsapp Webworks as the main app but requires that the smartphone in which the Whatsapp application is installed and from which we scanned the QR code, is accessing and is connected to the internet. In the event that this phone is disconnected, Whatsapp Web will also stop working.
If you want an application that makes it easier to access the same account from another Android smartphone or tablet and with a few more options for notifications, you can download the Whats Web app.

The so-called virtualization apps, of which I have already spoken in the past, create a separate environment on the Android smartphone (such as the Samsung, Xiaomi, Huawei, etc.) in order to be able to use an app with two accounts together on Android. As an application, you can use Parallel Space or CloneApp which is free and without advertisements.
Opening CloneApp it is, therefore, possible to create a new installation of Whatsapp on the phone so that you can access a second account. This trick is therefore useful on dual sim smartphones.

According to some official sources from the Twitter account WABetaInfo, WhatsApp is developing the feature that will allow you to use the same WhatsApp account on multiple devices at the same time, but with chats, they will remain encrypted and protected. The second access will require you to enter the registration code linked to the main phone number. We, therefore, hope, for 2020, that this possibility will finally be available to everyone.

READ ALSO: Whatsapp: Tricks and secrets on Android and iPhone

ISE 2022: from Hisense many new features with interactive screens and more