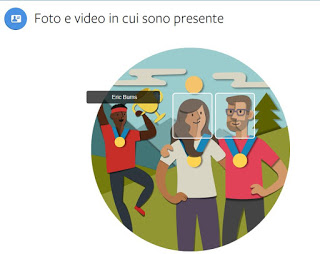 The meaning of “To tag“on Facebook and in other social networks like Instagram and Twitter is that of mention the name of a person in order to connect it a photo, to a post or in a comment, so that the profile of that person is clickable and sending him a notification about that update.
Practically tagging means identifying someone in a photo or call him in the text posts.On Facebook when you tag a person there are four practical consequences:
– Photos and / or posts automatically appear on the user’s profile (unless the user has put tag protection as we will see).
– Who is tagged receives the notification of that post which, therefore, cannot be ignored by him?
– The photo or post may be visible to all friends of the tagged person if the privacy settings have not been changed.
– If the tag is on a photo, even if uploaded by others, it can be found in the list of photos of a person.

Facebook’s automatic face recognition in the photos it is, instead, the technology that allows you to be automatically warned if someone uploads a photo where our face appears, which can be useful in some ways, at the cost of giving up another beautiful slice of privacy.

READ ALSO: How to activate facial recognition in Google Photos

Just to make a general summary, even if it is practically impossible not to know how to do it, let’s see how to tag on Facebook.
In written posts and also in comments it is possible to tag friends simply by writing the name or surname with a capital letter, without having to put the @ sign or other symbols.
When you start writing a name with a capital letter, in fact, Facebook will list all your friends with that name and will give you the option to tag them by simply selecting that name.
In the tag, that person’s name appears in full (name and surname) and highlighted in blue.
An interesting and less well-known trick is what allows change the name inside the tag deleting the surname (but you cannot change the name), without removing the tag (the name must, therefore, remain highlighted in blue).
Keep in mind that to prevent the list of friends from appearing for any word with a capital letter, the tag suggestions are displayed only after typing five characters or more than one name or when writing a full name shorter than the 5 letters.

In Facebook, it is also possible to tag Pages, events, groups, and other things, but in this case, it is necessary to place the @ symbol in front of us.
For example, you can quote the How2do page by writing @How2do (also in this case the suggestions appear automatically).

Tag the faces of friends that appear in a photo uploaded to Facebook is really easy and immediate.
On smartphones, just tap the boxes that appear above the faces on the photo before sharing.
On the PC, from the Facebook site, you must instead press the Tagga button, which is the one with the little man symbol at the bottom.
You can also add the tag after uploading and sharing the photo, opening it on the site and pressing the button on the right Tag the photo.

You can remove the tag of our name from a photo by placing the mouse cursor on your name to display our card and then click on the link Remove tags.

To check all the posts and photos we have been tagged in, we need to open the Facebook activity log.

That of Facebook’s facial recognition allows you to speed up the tags on your photos so that Facebook itself says that a certain person appears in a photo.
The novelty of facial recognition notified to everyone in these days of April 2018 requiring specific approval, had already been activated several years ago, then withdrawn following legal checks in the European Union (in the US there has always been).
On the presentation page of the Facebook facial recognition function, the function is presented with undeniable advantages, including:
– Speed ​​up the action of tagging people in photos;
– Check if strangers who use a photo with our face;
– Help those who have vision problems to recognize themselves in the photos;

Facial recognition, which is based on tags already made in the past, therefore allows Facebook to do an analysis of the photos that are uploaded suggesting the names of the people who “see” in the image.

In Settings, to the section Diary and addition of tags, it is possible to activate tag protection, so that when someone tags us before the photo or post is visible in our diary and to our friends, approval must be given.
The two options are below the section Check it out, one to check if the tagged posts appear on the profile and the other to approve the tags.

In the same settings section, it is also possible to decide who can see the posts in which we have been tagged in the diary and then also which people you can add to the post public when we are tagged.

READ ALSO: Look for people with faces in pictures recognizing the face.

Disable the automatic restart of Windows after an update

Tricks for Whatsapp Web on PC on site and Windows app

Guide to iTunes, options and features to manage the iPhone from your computer