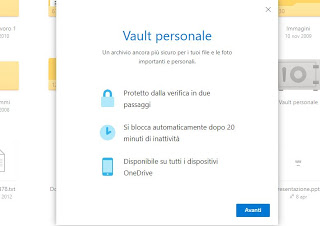 The latest version of onedrive brought a rather useful feature called Personal Vault. You can find this feature by pressing on the OneDrive icon near the clock on the taskbar and it's a great way to save personal files so that no one else can access them. The Personal Vault then creates an encrypted folder, where uploaded files can only be viewed and used if you confirm access to your OneDrive (Microsoft) account via two-factor authentication. The Personal Vault is available to all Onedrive users, free of charge, from PC, smartphone and also via website.
Activate the Personal Vault it is very easy from the Onedrive settings and simply requires you to have activated, on your Microsoft account, two-factor authentication, that is, which requires, in addition to the password, a variable code that can be received via SMS, via Email or generated via a dedicated application.
Once logged into the protected Onedrive folder, it becomes unavailable and locked after 20 minutes of inactivity, forcing the user to re-authenticate again. Also, if you prefer to access the Personal Vault via a website, the browser will never cache the page.

READ ALSO: How many things Microsoft Onedrive needs and how it works

How the Personal Vault works in Onedrive

From within the Windows 10 operating system, with Onedrive active, open File Explorer and then open the Onedrive folder (or search for OneDrive from the start menu to open the folder that synchronizes files on the cloud). Among the folders inside Onedrive, you will find a link called Personal Vault that if clicked allows you to configure the protection function. Going forward with the wizard, you will have to confirm your identity using verification options via email or by phone number.
When the verification is complete, the Onedrive personal vault folder will open automatically and can be added to it. files to keep protected and safe with encryption. Even on a shared PC where the same Microsoft account is used, to access the personal vault files it will always be necessary to confirm the identity by phone or email address, so there will be no risk (unless you share the email specified in two-factor verification).
If you want to configure two-factor authentication for your Microsoft and Onedrive account, you can open the account management page at this address https://account.microsoft.com/security/ and then press, at the top, up Verify in two steps.

To lock the Vault folder you can remain inactive on it for 20 minutes (in the meantime Onedrive send notifications to warn that if not used will be closed), or press Onedrive icon on the desktop to open the control box and press the button to lock the Personal Vault .
Using the free version of OneDrive, the Personal Vault allows users to archive only up to three rows inside. To eliminate this limit you need a Microsoft 365 account, even if there is a trick to upload multiple files into the Vault without paying anything: by uploading it inside zip file. In practice, you can create a zip file with all the files you want inside and then upload it to the Vault to make it count as if it were one.
Also note that the files stored in the Personal Vault cannot be shared with anyone.
Technically, the Personal Vault stores and encrypts files through Microsoft's Bitlocker-encrypt technology and also works on all versions of Windows 10, including even Home, which does not have Bitlocker support.

READ ALSO: Bitlocker encryption on Windows 10 and 7 for disks and USB drives

How to reduce CPU usage on Windows 11 and 10

How to clear activity history on Windows 11 and 10