Home Internet Play with Santa in his village and follow the sleigh around the...

Play in Santa’s village, follow the sleigh online and send him messages, and learn all about the holidays. 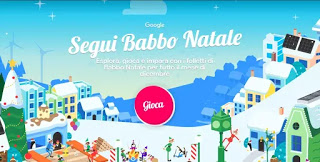 In this digital age, Santa is more connected than ever and you can imagine this fat and cheerful man living in the North Pole in a house with holographic displays, touchscreen windows, and wireless speakers connected via Bluetooth to the computer playing Christmas songs all the time. Obviously, Santa Claus is also a true technology enthusiast, with a smartphone and a tablet in which applications for the translation of foreign languages ​​and the map with GPS navigator are installed.
Thanks to technological advances, Santa Claus can receive Emails and answer questions sent by children also via Twitter and Skype. Nothing less is expected of a man who travels around the world in a sleigh which is perhaps the fastest vehicle in the world.To stay connected to him and follow Santa Claus in his village and on his journey around the world, there are some mobile applications and official sites.

Google has prepared a really fun and beautiful site to navigate, designed for children and all Christmas lovers. Is called Google Santa Tracker the site that allows seeing the village of Santa Claus is trace the journey he will take carrying the presents starting on Christmas Eve. You can then check where he is and when he will be in his city to bring gifts. At the time of writing, she is already delivering gifts to New Zealand.
However, the site is not only an interactive map but also a place to play and browse, all completely in Italian. Young and old alike can click on the various buildings in Santa Claus Village and start some simple but fun online games. Then scroll down and click on the various points where the mouse arrow becomes a hand to access a special section that can be a game or a moment in the life of Santa Claus, who is, at this moment, preparing gifts and receiving the letters.
Among the funniest games, there is the one where you have to pull the gifts from the top into the sled, the one where an elf flies with the jet backpack to hunt for gifts, and the one where you drive the sled on the snow. All games are controlled with the keyboard darts and the space bar. Among the various areas of the village, there is also one for talking to Santa and chat with him which is really funny and friendly (the call to Santa is unfortunately only in English).
You can play with Santa’s toy factory in the Village, create an elf by choosing his clothes, take care of the reindeer greenhouse and gym, practice delivering gifts, and take fun Christmas-themed programming lessons. By tapping or clicking the road you will find more than twenty games and learning activities, including a new 3D snow box where you can create your own winter scene.

There is also the Selfie of Santa Claus, who takes Santa Claus to the Barber and it is, therefore, possible to cut his beard, color his hair and beard and style him as you prefer to take the photo.
It should also be noted that by searching on Google, from the smartphone, the words Santa Claus, it will be possible to enter directly into the village of Santatracker, or also to press for coloring a Christmas illustration, that is a famous cover taken from Google Arts & Culture.

We can also find out what happens in Santa’s village by asking the Google Assistant on a smartphone or a Google Nest device (Home): “Ok Google, what happens at the North Pole?” to receive updates from the elves. Among other questions, you can ask the Google assistant”Write a letter to Santa Claus “.
This site, which is only active during the Christmas period and is taken offline during the rest of the year, is certainly not the only one that connects to Santa Claus and his GPS.

You can also browse on Norad Santa and follow his every move on the map provided by Bing, from the moment he begins his journey. To connect to Santa Claus with Norad you need to install the application available for iPhone, Android, and Windows Phone. You can also send an Email to Santa Claus by writing to the address [email protected].

In another article, I recall that the best sites for children have collected: games, didactics, fairy tales, and colors.

Another site to inquire about Santa Claus is Northpole.com which opens with a panoramic view of Santa’s secret village. You can click on the houses to enter and read stories (this time in English) and play.

Santa also has an official site in all the languages, Italian including, at the address Santaclausvillage.info (site of the real village in Rovaniemi in Finland). Here is all the information about Santa’s studio, the addresses to send Christmas letters to, the post office, opening hours, photos and videos of the Arctic Circle and the village where he lives and there is also a live shot with a fixed camera in the studio where Santa Claus works.

Still, doubts that Santa Claus doesn’t exist?
In another article, like send Christmas greetings via Email or with cards to print.

Find address and name from the phone number

The best templates to download a ready-made Christmas card

Change Colors in Windows 10, Dark or Light on Menus, Windows and desktops