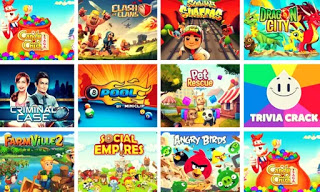 Social networks are able to put together people from all over the world, who have similar interests, even through games. Facebook, the number among all social networks allows everyone to play online challenging other people, who become real companions or opponents. The fact that then these adversaries are so many makes these games even more stimulating and fun (and even tiring) because one thing is to be the first of a thousand, another account is being in the top ten among a million players!
After writing about the best games on Facebook, let’s see now which are the most popular in the world, those who deserve at least one test.
This time, to do, even more, the list is one ranking of 20 Facebook games with more people: among fields of wheat, poker, candy, construction and management games, puzzle games for challenges with friends, there is something for everyone.

1) Texas Holdem Poker is the most played game on Facebook in 2019, the most played online poker in the world. This poker is not played for real money but with virtual chips but the games against friends are to the death. Millions of poker players have played this month, it is one of the few Facebook games that continues to grow.

2) 8 Ball Pool is the billiard game in which to challenge online friends and strangers in very tight games, where everyone wants to become the strongest. The game boasts over 10 million monthly users and offers very good graphics. The rules are simple enough to understand and even if you have never played billiards before.
This billiard can also be played on Android and iPhone.

3) candy Crush Saga, after so many years it is still one of the most popular Facebook games with over 50 million users a month. The game has over 1000 levels and really seems to never get tired. For the few who have never played it, it is a question of putting together the candies of the same color until they are all removed from the picture, which is often difficult given the limited time and the few moves available. The game on Facebook can be synchronized with the one on iPhone and Android to play continuously both from PC and mobile.

4) Farm Heroes Saga is another popular puzzle game that is just like Candy Crush. The main difference here is that instead of exploding and emptying the candies, you will delete the farm products. I love this game because the levels here are different from those of Candy Crush and as you progress further, the game becomes more challenging. If you like playing Candy Crush, definitely try this game as well.

5) Subway Surfers is a game that can now be considered in the hall of fame of Facebook, for years at the top of the charts also in the Apple and Android stores. Subway Surfers is an endless running game, where you have to get as far as possible avoiding obstacles that block the race.

6) Dragon City is a game based on random strategies in which you create your farm, build buildings, grow food and more to support your dragon farm. It is collecting and healing their dragons and then feeding them to grow into impressive beasts. You can also have your dragons fight against other players online to win more dragons and prove your superiority.

7) Cookie Jam is a fun, free game, similar to Candy Crush, where you have to crumble cookies by combining them with others.

8) Trivia Crack is a quiz game that allows you to challenge friends or other Facebook players by answering general knowledge questions on various topics such as Entertainment, Science, Sport, History and Geography, Art and Literature and Technology.

9) Coin Master is a multiplayer war game with nice graphics, where you have to attack enemies to steal money and, at the same time, build defenses to defend your empire.

10) Bejeweled Blitz is the good old gem game where you have to put those of the same color in a row. The game is played by around 125 million players worldwide.

11) Happy Pets is the Facebook game where you can adopt kittens and puppies to give them shelter, taking care of these virtual animals as if they were real.

12) Monster Legends is a game where you collect monsters to fight in the war. With strategy and action, it is one of the most played games on Facebook of its kind.

13) Kingdoms of Camelot is a rather complex and advanced game with the construction of an empire and, above all, one of the few Facebook games where you can wage war against others.

14) FarmVille 2: -FarmVille 2 was in the past the number one of Facebook games, today still played mainly by smartphone. On Facebook, the Tropic Escape version is active, where the farm is located on a tropical island.
In another article, I wrote some Farmville tricks to win more easily.

15) Pet Rescue Saga is another of the games derived from Candy Crush, where you can save pets from the hands of kidnappers by matching two or more blocks of similar color. The game offers limited moves, making each level increasingly difficult to finish. Pet Rescue Saga is free and can be played with Facebook friends on Gameroom for PC or smartphone, with synchronized levels.

16) Criminal Case is an adventure game where you have to solve cases of the police investigation, find them guilty of brutal crimes such as murders and violent robberies by looking for and discovering clues. The levels get more and more difficult as you go along and it’s a great challenge for lovers of the genre.

17) Bubble Witch 3 Saga, another game by the creators of Candy Crush, always with the same concept of matching bubbles of the same color to make them disappear.

18) Pearl’s Peril is a fantastic puzzle that combines mystery and history. The game is set in the 30s and puts the player in the shoes of a woman who wants to explore the world and face a journey full of adventures, emotions, and many surprises.

19) Throne Rush is a simple real-time strategy (RTS) game with simple and intuitive gameplay. You have to build buildings, create an army, fight other people and defend the kingdom. With really good graphics, those who are fond of the genre will find thousands of players to challenge.

20) Clash of Kings is one of the most popular strategy games on Andriod and iPhone, playable even from PC on Facebook. This is also a competitive RTS game where the main objective is to create a powerful army so that you can defend the castle and attack others to earn money and treasures.

21) Dragon Glory is an MMORPG browser game with high-level graphics and a compelling story. There are dungeons to explore and a PvP mode to challenge other players.

22) SongPop, the game where you guess songs, it is still, years later, one of the most popular on Facebook with lots of new music to listen to and guess.

In other articles on Facebook games we have also seen:
– 10 funniest action, sports and simulation games on Facebook

Create a server at home to share resources on the internet

How to increase and improve the speed of the WIFI

WhatsApp: a new version of the Reactions has been spotted

Best Intel processor of the moment