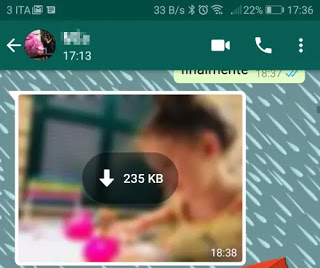 Whatsapp is not just a chat, but also the most used tool to exchange photos and videos between friends.
Whatsapp has a storage system and storage of “media” received rather surprisingly, so as to make it possible to review images and videos even from a long time ago and even if they have been erased from the phone memory.
WhatsApp, in fact, allows users who have removed multimedia content from their devices to recover them without having to make any backups.
Any file received can be recovered and re-downloaded by Whatsapp, not only images, but also videos, GIFs, voice messages, audio files, and documents.The only problem is that this automatic recovery does not always apply, because, for example, the photos sent that were then deleted from the phone memory, can no longer be recovered, unless special methods are used.

Recovery of photos and videos of WhatsApp on iPhone

On the iPhone, whenever a multimedia content is received by someone on WhatsApp, it is not automatically loaded.
The photo, for example, is displayed blurry with a download symbol that you need to touch to view it.
After downloading a photo or video, it is saved in folders “Whatsapp” and also in”roll” in Photos (in”Video” if it’s a video).
GIFs, on the other hand, are not saved in Photos and remain only in Whatsapp.

After downloading and viewing the photos and videos received in WhatsApp messages, these can be removed from the Photos app without fear.
First of all, by default, all media deleted on iPhone is not deleted immediately in the Fotoma app just moved to the “folder” Recently deleted“where they will remain for 30 days before finally disappearing.
In any case, however, even after deleting the photo or video, it can be recovered opening the chat where it was received in Whatsapp where it can be downloaded again.
The important thing is that the multimedia content or the chat in which it was received must not have been deleted by WhatsApp,
If the conversation is still there and has not been canceled, you can search for each photo and video from the chat settings and then, touch the item to save it using the button. Share lower left.
The image or video will return to the Photos app.

If it is a photo or video sent on WhatsApp, it works exactly the same way and just touches it and uses the share icon to save it.

Recovery of photos and videos of WhatsApp on Android

The WhatsApp Android app is slightly different from the iOS app.
Also in Whatsapp on Android, if you turn off automatic media download (in Settings> Data usage> Archive), received photos and videos appear with the blurred thumbnail and the download icon, with also the indication of the file size.
Furthermore, these will appear in the Gallery of the Photos app only if the option has been activated in the settings> Chat (see also how to hide photos received in Whatapp from the gallery)
For each file received in the past, if this has been deleted from the phone’s internal memory, it will be possible to recover it opening the chat where it was sent and touching the blurred thumbnail to be able to download it again.
Recovery will not be possible if the conversation has been canceled (if a group has been left) or if the content of the specific message has been deleted.
The restored media that is downloaded will also be visible on your main photo gallery (if the option is active).

Recovery of very old photos may not work and when you try to touch the button to download them from the blurred thumbnail in the chat, the message appears “Download failed, this media is not present, ask …. to resend it“.
I didn’t understand the storage time limit in the cloud as it is in Whatsapp, so maybe let me know.

For photos and videos sent from your phone instead, if these are no longer present in the phone memory, even if the message and the thumbnail are present in the chat, there is no way to re-download and restore it.
If you can’t recover the photo or video because it was manually deleted, there is still hope if the option to delete the media from the phone has not been used.

If you create a chat with yourself on Whatsapp, the files saved in this chat will remain recoverable from the cloud and available, at least for several months.

In each chat, you can touch the options button at the top right and then go to see the list of all the shared media.
Finally, we remember that in Settings> Archive usage, you can see all the photos, videos, GIFs and audio messages of each chat in order to Free up space in Whatsapp and delete photos and videos from some conversations forever.

Finally, I refer to the guide to Recover deleted Whatsapp messages and restore backups to be used as a last resort to find deleted photos and videos.

10 New tricks and functions of Whatapp

How to update a Mac