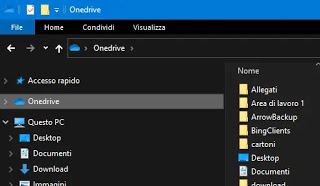 OneDrive is Microsoft’s cloud storage and synchronization service that allows you to save the most important files online to make them accessible and usable from any other computer and online. OneDrive works well, it is a great alternative to Google Drive which has the advantage of being already installed and integrated into Windows 10. Furthermore Onedrive is also accessible from File Explorer, ie from the tree of paths that can be seen on the left side when opening any folder. The only problem is that, if you don’t use OneDrive or if you don’t want to see the Onedrive folder inside File Explorer, there is no button to remove it easily and you have to use less immediate methods that need an explanation.
While in another article we had explained how to disable OneDrive, in this we see instead how to remove Onedrive from Windows 10 folders.Onedrive in Windows 10 has a dedicated section in Windows Explorer which you can see on the left side of the window, opening any folder. Onedrive lists all the files uploaded to Microsoft’s online space even if the files aren’t really on the computer, it’s just projections. In order to make a file accessible even without an internet connection, it must, in fact, be made available offline.
If you are not using Onedrive, seeing the Onedrive folder in File Explorer is completely unnecessary and well worth the 2 minutes of time to make it disappear and remove it.

1) Uninstall OneDrive
If you don’t use OneDrive yourself, the best way to get rid of it is to uninstall it.
To uninstall OneDrive on Windows 10, open the Control panel and click on the link Uninstall a program under the writing Programs.
So look for Microsoft OneDrive in the list of installed programs, press on it and then click on the option Uninstall.
Can be uninstalled OneDrive even by opening Settings from the Windows 10 Start menu, then going to App and, under the section Apps and features, search the list Microsoft Onedrive and press on it to be able to click the button Uninstall.
If you want to reinstall OneDrive you can do this by going to the folder C: Windows SysWOW64 (if 64 bit Windows 10) or C: Windows System32 (if Windows 10 32 bit) to find the file OneDriveSetup.exe. With a double click on this file you can reinstall OneDrive.

2) Change registry key to make OneDrive disappear from Windows 10 folders
If you don’t want to remove OneDrive entirely, but prefer it not to appear as a folder in Windows 10 File Explorer, instead of uninstalling the application, you can make a change to a registry key by following these steps:

Without needing to restart the computer, you will notice that Onedrive is no longer present in the list of paths inside the folder windows in Windows 10.
To view OneDrive again in File Explorer, you can repeat the operation seen above and give the key System.IsPinnedToNameSpaceTree the value 1.

How to Free up RAM on iPhone