Home Programs Scan Malware for free with Malwarebytes 4 for PC 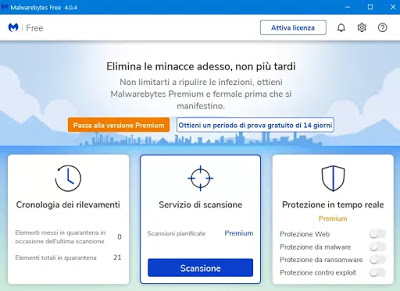 Malwarebytes Anti-Malware (MBAM) is certainly one of the most valid and reliable programs for computer security, effective in finding and above all removing malware, even the most hidden, even potential ones.
Although there are numerous alternatives, among the best anti-malware programs that of Malwarebytes is the number one, even in his free version which is what interests us most in this context.
Malwarebytes Antimalware 4 is the new version of the product that is now offered both as a commercial payment solution for complete PC protection, excellent to replace any antivirus, and even in a free version to be used as an antivirus scanner. Given the occasion of the release of this new version, I really recommend everyone to take advantage of the moment, Download Malwarebytes 4 immediately and clean your computer from any hidden or potential viruses and malware.
After downloading and installing Malwarebytes 4 (MBAM) on Windows PC Windows 10, Windows 7 and Windows 8.1 (does not work on previous versions such as Vista and XP) you will find the possibility to choose between the paid version and the free version. The free version includes only the antimalware scans, which is the strength, the main function and the best feature of this security tool. Even by choosing the free version you can take advantage of a 15-day trial period of the Premium version. It is, therefore, possible to activate real-time protection (in this case Malwarebytes is set as PC antivirus, disabling any antivirus already installed or Windows Defender). Before starting the scan, it is advisable to open the Settings by pressing the gear button at the top right. In the settings, on the tab Safety, you can disable the automatic launch at Windows startup (useless if it does not have the Premium version) and instead activate the option for the rootkit scan. In the tab Generalinstead, you can disable the usage statistics option to prevent the company from collecting data from our PC. All other options can only be activated with the Premium version.
Note that Malwarebytes Antimalware also works as Anti-Exploit (against 0-day attacks, ie that exploit security bugs that are still incorrect) and how anti-ransomware and that in its scanning uses artificial intelligence to identify harmful or potentially harmful elements.
Unfortunately in Malwarebytes 4 the possibility of programming automatic scans to be done every month in the free version has been removed, so it will be necessary to remember, every now and then, to do a manual check. The scan is quite rapid and manages to identify and remove any threat, even minor or unknown or the only potential, without false positives and with surgical precision.
MBAM is still today the most effective scanning tool to remove any type of virus on the PC, even the most hidden ones, even those that normal antiviruses cannot identify.
In Malwarebytes 4, even in the free version, the updates are automatic.The new Malwarebytes interface shows the button Scan at the center and then the real-time protection tools that can be activated only with the premium version. Among these are “Web protection“, “Malware protection“, “Ransomware protection” is “Exploit Protection“.
Pressing the button to scan the PC, the control starts directly to detect malware and viruses with the default settings. If instead of pressing the blue button, click on Scanning service, you can then use the custom scan options by pressing Advanced scanners. Subsequently, by pressing Configure Scan, it is possible to exclude disks and folders from the control, activate the anti-rootkit control and choose how the program should behave in case of the detection of unwanted programs and unwanted changes.
After a scan or from the Scans tab you can see the reports with the results of the infections found. Malwarebytes allows quarantined infected files to be placed for every security problem discovered. In the report, it is possible to click on the various elements to open the web page explaining the problem. On the Malwarebytes website, you can see what the most common threats are.

Malwarebytes 4 has been much simplified compared to previous versions, although its use of memory during use is quite high on the PC. Even with the new version, Malwarebytes Antimalware 4 remains the best in its category, especially for its ability to scan for malicious elements that are free forever and without limitations.

Eliminate Trojans and protect your PC with an Anti-Trojan

Internet Smart TV problems: how to solve them